The miracle of Madtown

Then Jesus said, “Whoever has ears to hear, let them hear.” Mark 4:9 Evidently, some of our culture warrior bishops haven't heard what Pope Francis is saying so clearly: the church "cannot insist only on issues related to abortion, gay marriage and the use of contraceptive methods" and that "it is not necessary to talk about these issues all the time" . Some, like Bishop Morlino of Madison, for whom RC seems to mean Republican Conservative as much as Roman Catholic, are more eager than ever to pursue the rightwing social and political agenda as shown in a recent interview published in the Real Clear Religion blog. Nicholas G Haan III Real Clear Religion December 30, 2013 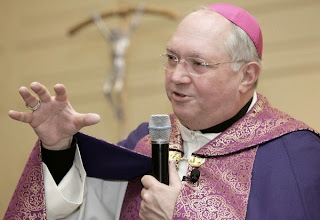 -------------- Bishop Morlino asserts that the Obama administration has "made itself the enemy of the Natural Law," even though he admits that this kind of open criticism is better suited for the laity. When Bishops throw their mitres into the political ring, "it has to be clear then that they are offering their prudential judgment" and not a binding teaching. "But I know that calling this administration to account for more than offenses against religious liberty is necessary," Morlino says, "because the only hope we have for common ground is the Natural Law." Morlino looks no further than his own flock for further hope. Congressman Paul Ryan "is the one of the best at carrying out lay mission as a Catholic politician," Ryan's Bishop says, and would be "very supportive" if the former Republican Vice Presidential nominee decided to run for President in 2016. Just as with Salvatore Cordileone in San Francisco or Thomas Paprocki in Springfield, Morlino believes that he was called to shepherd Madison because of its "exaggerated secularism." His shepherding has so far not been without use of his staff. ......... Parishioners in small-town Platteville bristled when priests banned female altar servers and steamed when they were no longer welcome as Eucharistic ministers. Some took to writing letters or leafleting cars in the church parking lot; others left in protest. By Morlino's lights, they are what St. Benedict called "murmurers." Platteville parishioners weren't expecting that, nor did they expect their bishop to threaten them with an interdict, a Canonical punishment. But after those who "feed on making trouble in a parish" realize that "they cannot destroy a parish community," Morlino shrugs, "they usually will go elsewhere." Many initially did. Parishes with Society priests saw dips in membership, but attendance is coming back, the diocese reports. "The murmuring has subsided," Morlino says cautiously. ---------------- The full article can be read here
Posted by Mike at 9:03 AM