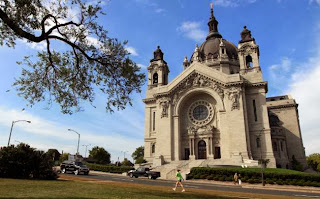 December 2, 2013 The Archdiocese of St. Paul and Minneapolis must release the names of 33 priests accused of sexually abusing minors by Dec. 17, a Ramsey County District Court judge ruled Monday morning. Judge John Van de North ordered that the archdiocese provide not just the names of the priests but their year of birth, year of ordination, the list of parishes where they served, their current ministerial status and residence and whether they are still living. The same information must be provided by the Diocese of Winona, Van de North ordered. “We are greatly relieved that finally there will be disclosure so children will be protected from further harm and those who have been hurt can come forward,” said Jeff Anderson, a St. Paul attorney specializing in clergy sex abuse. Anderson is representing John Doe 1, whose sexual abuse lawsuit sought to force the archdiocese to reveal the names of abusive priests. Ramsey County District Judge Gregg Johnson ruled in 2009 that it be kept private in that case. The lawyer for the archdiocese referred questions to an archdiocesan spokesman who could not be reached immediately for comment. The archdiocese had agreed to provide the information for 29 of the 33 priests on the list. But the judge ruled that the information should be made public for all of them. Last month, in response to new allegations of clergy sex abuse against several priests, Archbishop John Nienstedt promised to release some names of accused priests, with court approval. The list was created when U.S. bishops commissioned the John Jay College of Law in New York to compile a nationwide statistical summary of the clergy abuse of minors not long after the church’s clergy sex abuse scandal erupted in Boston in 2002. Dioceses were asked to review their records over the past 50 years and submit data for the study. Among the findings by the Twin Cities archdiocese: A total of 26 diocesan priests had been accused of sex abuse involving minors. If priests of other religious orders and other dioceses who had worked in the archdiocese were included, seven more priests, 33 in total, were known to have been accused of abusing minors.
Posted by Mike at 12:02 PM