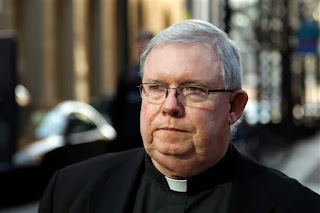 A Pennsylvania appeals court on Thursday overturned the conviction of the first U.S. church official ever charged or convicted in connection with how he handled complaints that priests had sexually abused children. Msgr. William Lynn, who has never been accused of personally molesting any child, was convicted in 2012 of endangering the welfare of a child for how he handled the case of a priest who had been accused of sexually abusing children. Lynn, who has already served about 18 months in prison, could be released as soon as Friday, a Superior Court of Pennsylvania appeals panel ruled. In overturning the conviction, the three-judge panel unanimously rejected prosecution arguments that Lynn, 62, was legally responsible for the abused child’s welfare. Philadelphia Dist. Atty. Seth Williams said he probably will fight any attempt to release the church official. “I am disappointed and strongly disagree with the court's decision,” Williams said in a statement. “While we are deciding what our next course of action will be, we most likely will be appealing this decision.” Lynn's trial became famous around the nation as many Roman Catholic dioceses were dealing with allegations of sexual abuse by priests. The charges against Lynn stem from the case of former priest Edward Avery, who is serving 2 1/2 to 5 years in prison for sexually assaulting an altar boy. During his trial, Lynn admitted that he had handled a complaint in the 1990s that Avery had sexually abused an altar boy. Instead of removing Avery from the ministry, Lynn recommended that he be sent to rehabilitation. Several years later, Lynn reassigned Avery to work at a parish, where he again sexually assaulted an altar boy. At the sentencing, Philadelphia Court of Common Pleas Judge Teresa Sarmina told Lynn that he used his role as a church official to shield priests who had abused children. “You knew full well what was right, Msgr. Lynn, but you chose wrong,” the judge said before sentencing him to three to six years in prison. “I did not intend any harm to come to” the boy, Lynn said in court. “My best was not good enough to stop that harm.”
Posted by Mike at 4:43 PM