Polish archbishop under fire for linking pornography with child abuse 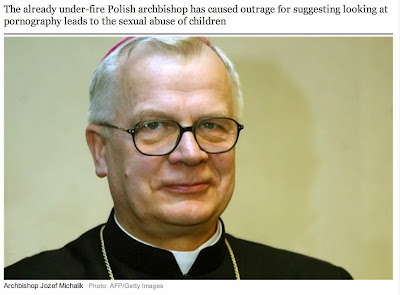 The head of Poland’s Catholic Church has been attacked for suggesting that child abuse resulted from pornography. It is the second time in as many weeks that the opinions of Archbishop Jozef Michalik have sparked outrage. Last week he was forced to apologise for saying sexual abuse by priests occurred because children from broken homes “were looking for love”. In his latest controversial comments the archbishop said abuse stemmed from homes broken on pornography, “selfish” love and “the ideology of gender that raises legitimate concerns, because it goes against the laws of nature, promotes marriage between persons of the same sex and fights for the right to legalize adoption of children by these couples.” A series of recent child sex abuse scandals involving priests has sent the Polish Catholic Church reeling and scrambling to regain its position but the archbishop’s comments appearing to try to deflect the blame from the perpetrators onto modern society or even the victims themselves provoked a furious backlash. Agata Baraniecka-Klos, who was sexually abused as a child and now heads an organisation fighting to bring paedophiles to justice, said the archbishop’s words “were cruel to the victims” and that the “internet, feminists or gender ideology were not the problem.” In an emotional television interview she added that Archbishop Michalik’s comments had brought back the trauma of her childhood experiences. Poland’s media seized upon the story donating copious amounts of airtime and news print to critical coverage of the archbishop and the Church’s failure to deal with a string of sex abuse scandals that has brought the status of the Catholic Church in the country—once exulted and synonymous with all things Polish and the country’s freedom—to an all-time low. The archbishop also received criticism from inside the Catholic Church. “He has a problem with accepting the fact that the issue of paedophilia in the Church may have something to do with priests and the structure of the Church,” Father Jacek Prusak, a Jesuit priest, told the TVN 24 news channel.
Posted by Mike at 7:56 AM