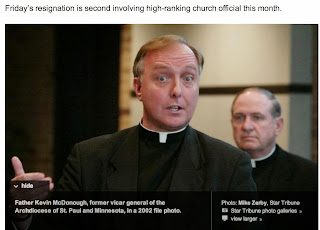 The Rev. Kevin McDonough, a Catholic official who was involved in the handling of three controversial sexual misconduct investigations of fellow priests, has stepped down from the University of St. Thomas board of directors, a university source confirmed Friday. The news followed a week of allegations that one of the school’s Catholic studies professors sexually abused a teenage girl. McDonough was involved in the archdiocese’s investigation of claims against the Rev. Michael Keating in 2006. On Thursday, e-mails that Keating sent to the girl from Rome in 1999 and 2000 were made public by her attorney, Jeff Anderson. McDonough, a former vicar general in the Archdiocese of St. Paul and Minneapolis, is the second high-ranking church official to step aside since allegations began surfacing that the archdiocese did not take action against priests accused of sexual improprieties. He reportedly resigned Oct. 4. The Rev. Peter Laird resigned as vicar general Oct. 3, the same day that lawyers for the archdiocese presented a police report in court that described allegations that a Hugo priest had kept pornographic images on his computer. He now is on a leave of absence. McDonough is pastor of St. Peter Claver Church in St. Paul. The archdiocese outlined no specific new job for Laird, saying only that he “will continue to serve in a variety of roles within the archdiocese.”
Posted by Mike at 7:52 PM