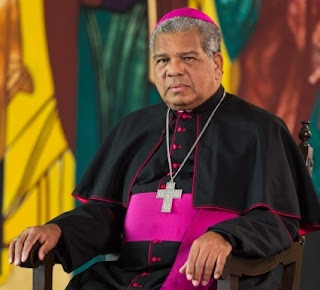 If ever examples were needed that Pope Francis has set out to change the face of the Latin American episcopate, his naming of a low-profile pastor from a small diocese in the Dominican Republic to be the next Primate of the Americas should make it to the top of the list. The Vatican on Monday announced that Bishop Francisco Ozoria Acosta of San Pedro de Macorís (population: 500,000) will be the new Archbishop of Santo Domingo (population: 5 million), replacing the mercurial Cardinal Nicolás de Jesús López Rodríguez. After his installation on September 4, Archbishop-elect Ozoria Ocosta - who is barely known to the media - will head the mother diocese of the Dominican Republic, from where the evangelization of the Americas was launched. The new archbishop’s cathedral, which houses the remains of members of Christopher Columbus’s family, was raised by Pope Paul III to be the “first cathedral of the Americas” in 1546 at the request of Charles V of Spain. “I’m sure this has been a surprise to you all,” the archbishop-elect told journalists at an early-morning press conference in Santo Domingo. “I can assure you that the most surprised of all was me!” he said. The long-awaited replacement for the 80-year-old López Rodríguez brings to an end a seemingly interminable interregnum, in which the cardinal has been barely visible. A towering figure in not just the Latin American Church but in Dominican public life, the cardinal suddenly withdrew from public sight before Christmas last year, and has been barely seen since, even at Christmas and Easter liturgies. Speculation over his condition - said to be a mixture of illness and depression - has been constant in the press, whose stories about the Church usually include a reference to “the cardinal’s long silence.” His replacement as archbishop told journalists today that he faced two major challenges: standing in the shoes of a figure of the cardinal’s strength and capacity, and moving from a diocese of half a million people to one of five million. His nomination has shocked many observers, who were assuming that either Freddy Bretón, archbishop of the country’s second city, Santiago, or Victor Masalles, the talented, but, at 55, still young auxiliary of Santo Domingo, would assume the mantle. The pool of candidates was fairly small - most Dominican bishops are in their seventies - and the Bishop of San Pedro de Macorís, 65, was not one of those being mentioned when I was on the island a few weeks ago. But Ozoria Ocosta’s resumé - in which the word “pastoral” appears constantly - gives a clue as to why Francis wanted him. Like the pope, he studied pastoral theology (in the Dominican’s case, at the Lateran in Rome) and taught the subject at the seminary in Santo Domingo, where he was also in charge of formation. He went on to be a parish priest in his home city of Nagua before being named bishop of the newly created diocese of San Pedro de Macorís, in the south of the island, in 1997. There, without making much noise nationally, he has produced vocations and a strong pastoral presence, and heads the bishops’ commissions for formation, laity and young people. Leslie Torres, director of the Dominican Catholic channel Televida, knows the new archbishop from his previous diocese. “He’s a pastor who’s approachable, humble and straightforward, with a great capacity for listening and dialogue,” she told Crux, adding that he was “able to look at his people with a big heart.” A greater contrast with the witty, acerbic, sophisticated but clerical Cardinal López Rodríguez would be hard to find, even in appearance. Whereas the cardinal has the classically European features of the upper classes, the new archbishop looks, and sounds, like most mixed-race Dominicans. In a country where the topic of immigration from neighboring Haiti is never far off the agenda, that in itself represents a shift. Ozoria Ocosta told journalists this morning that he was a “passionate follower of the Second Vatican Council, above all of the ecclesiology of communion that underpins our national pastoral program.” He promised to join with all pastoral agents, both lay and religious, in a shared mission of evangelization. He said his goals as archbishop would be to “give continuity to the Church’s mission,” get to know the archdiocese, and to perform the three tasks of a bishop of shepherding, educating and sanctifying. “But let us not forget,” he added, “that all the baptized participate in these tasks.” The Vatican also announced this morning that it had accepted the resignation on grounds of age of one of the cardinal’s auxiliaries, Spanish-born Carmelite Amancio Escapa Aparicio.
Posted by Mike at 8:15 PM