Christian martyrdom and the thirst for a "holy war" 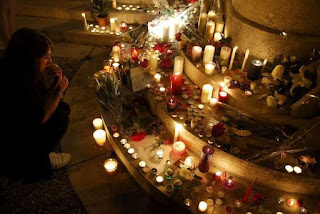 The savage barbarity which drove a young fanatic to slay a priest at the altar, invoking the name of Allah, is shocking and unnerving: this is the first time a priest has died inside a European church. What has happened and is still happening in other countries - from Turkey to Iraq, Syria, Central Africa and the Philippines – is now happening on our turf. The slaughter took place a peaceful little French village, against a kind and defenceless elderly man who had done nothing but preach peace and love all his life. It is important to remember, however, that Islamic fundamentalists are not the only ones who have the monopoly on murdering priests and bishops: the Salvadoran bishop Oscar Arnulfo Romero, for example, who is now a Blessed, was assassinated at the altar by Christian Death Squad members in 1980. ISIS’s terrorists, the latest in a series of strange creatures which the West played its part in creating by supplying arms to anti-Assad rebels, want to bring their jihad right to the heart of our cities. They want to inject fear into our day-to-day lives. They want to turn our lives upside down, as they have done in other countries, where attacks have become an almost daily occurrence, with tens of thousands of innocent victims no longer making headlines. Daesh, the self-proclaimed Islamic state has declared that its one goal is to unite Sunni Muslims around it. In order to achieve this, it has to bring its “holy war” and its “clash of civilisations” to our towns and cities. It has to make us as westerners and Christians, as descendants of the “crusaders”, “feel at war”. It has to make us forget about the fact that the vast majority of victims of fundamentalist Islamic terrorism are Muslims. In the face of all of this, we cannot simply look the other way. But we would be playing the terrorists’ game if we think that the right response to this is another “holy war” that can contrasts theirs. Adopting attitudes typical of a “holy war”, as some sectors of the European Catholic world do, not only means giving into the Caliphate, giving the fundamentalist assassins exactly what they want and seek. It also and above all means forgetting all that is truest about the experience of the Christian faith. The Christian faith that is lived in a genuine way not a faith that has been genetically modified to create an identitarian ideology or a cultural-political movement. There is in fact a way of talking about what happened in France, of speaking about Christian persecution which is not Christian in any way even though those who engage in it feel themselves in some way to be militants of western Catholicism. The only authentically Christian words are those which remind us at the moment of how the reality of martyrdom belongs to the life of the Church right from the start. An experience that has always been there. “If they persecuted me, they will also persecute you,” Jesus said. As Pope Francis recalled the day before his visit to Armenia last month, Christian martyrs are ordinary people, men, women, children. Their innocent sacrifice, the blood they shed , has always been a seed for new Christians as Tertullian said and has brought fruits of reconciliation, forgiveness and love. The approach of faith points out the only real answer to the latest brutal and bloody attacks that burst our bubble of indifference. As testified some time ago by an elderly Coptic Christian woman who cannot read nor write and has never left her humble clay hut on the banks of the River Nile. She refused to curse those who killed her son on the Libyan coast. Instead of cursing them she prayed for their salvation. This seemingly “weak” response does not only reflect one of the peaks of human civilisation. In it, one discerns first and foremost the sign of the Christian God’s “almighty weakness”, who lowered and humiliated himself in order to share human suffering.
Posted by Mike at 5:53 AM