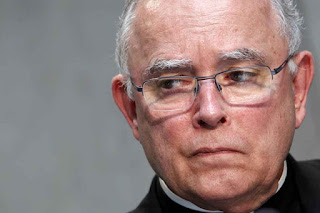 Mayor Kenney on Wednesday denounced as "not Christian" Archbishop Charles J. Chaput's insistence that Catholics living in relationships the church considers sinful may not receive Holy Communion or hold positions of responsibility in parishes. The mayor commented on twitter: "Jesus gave us gift of Holy Communion because he so loved us. All of us. Chaput's actions are not Christian." Kenney's was among the sharper reactions Chaput's decree drew from around the region. Some were swift to denounce the archbishop as an "old white man" whose church was out of touch. Others, though, hailed the archbishop for upholding traditional church teaching or deferred with a shrug to his authority. The mayor, who was raised Catholic, has often been sharply critical of Chaput's conservative stances on matters of faith. On Friday, Chaput posted on the archdiocesan website six pages of guidelines for clergy and other local church leaders on how to implement Amoris Laetitia, a major document on the family Pope Francis issued in April. Some theologians have said Amoris calls on church leaders to be more welcoming of Catholics who are estranged from parish life because the church disapproves of their sexual relationships. Chaput was emphatic that this does not mean Francis has reformulated the church's traditional ban on Communion for those Catholics who live in what the church views as sin - such as divorced Catholics who remarry outside the church, sexually active gays, and cohabiting unmarried couples. In Amoris, Francis "states clearly that neither Church teaching nor the canonical discipline concerning marriage has changed," Chaput remarked in his guidelines. Holy Communion is a central element of the Catholic faith, which holds that the prayers a priest utters over bread and wine during Mass transform them physically into the body and blood of Jesus. Barring a person from receiving Communion does not mean that he or she is excommunicated. But many of those barred have complained of feeling shunned, embarrassed, or marginalized. Many laypeople and clergy had hoped Francis might ease the church's position regarding Communion in Amoris Laetitia, but despite his call for clergy to listen compassionately to the pain of those who feel excluded, he did not make any explicit changes to the teaching. Chaput's guidelines may be the first of their kind issued by the bishop of any American diocese in response to Amoris Laetitia, Latin for "the joy of love." Chaput's position did not upset Lydia Carbone, a member of St. Patrick's parish in Center City. "It's not for me to judge the church's teachings," she said. Unmarried after a divorce more than 16 years ago, she has led programs at her parish designed to help the newly divorced understand the church's stance that they may not remarry in the faith unless their first marriage is declared invalid by a diocesan tribunal. But she was pleased, she said, that Pope Francis "seems to be opening dialogue in the gray areas" around divorce and remarriage. "I'm hoping the church will be more open and welcoming." Others were fuming. An article on the guidelines in Wednesday's Inquirer generated more than 1,000 comments, most of them harshly critical of Chaput. Across the street from the Cathedral of SS Peter and Paul, an 18-year-old Catholic questioned the wisdom of the guidelines Wednesday afternoon. "It's isolating people," said Mia Trotz, a college student in Philadelphia selling water ice at Sister Cities Park. But Carl Miller, 58 and gay, said he admired Chaput for his stance. "I believe the Catholic Church's teachings are ultimate truth," said Miller. "I struggle with living it perfectly," said Miller, who attends Mass weekly and receives Communion, "but I think the archbishop is right in restating what the Catholic teaching is." He declined to name his hometown or parish. A large part of the debate involves just what Francis meant to say about the inclusion in parish life of unmarried but cohabiting Catholics, those in same-sex relationships, and the estimated 4.5 million who are divorced and remarried without an annulment. "It's being read in different ways by different individuals and different bishops," said John Grabowski, associate professor of moral theology at Catholic University of America. Grabowski, an authority on Amoris Laetitia, noted that in one place Francis writes that priests have the duty to accompany those who divorce and remarry outside the church "in helping them to understand their situation according to the teaching of the Church and the guidelines of the bishop." But Grabowski noted that Francis also wrote in Amoris that "I would also point out that the Eucharist 'is not a prize for the perfect, but a powerful medicine and nourishment for the weak.' " And for those struggling to reconcile what appear to be Francis' positions, Grabowski pointed to yet more lines from the pope: "I understand those who prefer a more rigorous pastoral care which leaves no room for confusion," wrote Francis. "But I sincerely believe that Jesus wants a Church attentive to the goodness which the Holy Spirit sows in the midst of human weakness, a Mother who, while clearly expressing her objective teaching, always does what good she can, even if in the process, her shoes get soiled by the mud of the street." "I don't want to say this is murky," said Grabowski, "but it's not crystal clear. So what happens is that people find support for differing positions. So it's going to be up to different bishops to decide how this document should be implemented in their dioceses."
Posted by Mike at 3:35 PM