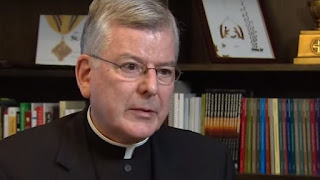 So where does a Minnesota Archbishop go after bankruptcy and a criminal investigation? How about California wine country. John Nienstedt resigned as Archbishop of the Archdiocese of St. Paul and Minneapolis last June. He left the Archdiocese in bankruptcy and amid a criminal investigation, stemming from a cover-up of sexual abuse in the church. In May, the Fox 9 Investigators had tracked John Nienstedt to Michigan. But according to the church abuse survivors group, SNAP, Nienstedt is on the move again. This time, the group says he's working with a Catholic conference known as the Napa Institute, which is holding its annual conference this weekend at the upscale Meritage Hotel in Napa Valley. (The Napa Institute is a gathering of conservative churchmen with well-heeled conservative donors. The Executive Director of the Napa Insititute confirms for Fox 9 that Nienstedt will be performing devotional services there this weekend, but wouldn't comment if he will have a permanent affiliation with the group. SNAP says given his alleged cover-up of sexual abuse in the church, that is an honor he should not receive, and that he should be de-frocked.
Posted by Mike at 7:09 PM