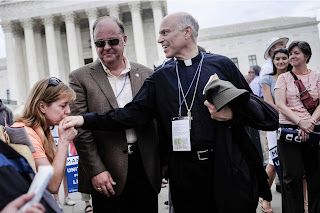 I’m starting to be concerned about San Francisco Archbishop Salvatore Cordileone. For a man of the cloth, he seems awfully fixated on sex. It seems he can turn any topic into an examination of sex and sexual identity. On Wednesday, Cordileone was at a conference in Manhattan that was promoting the idea of conducting Mass in Latin. If you think it would be difficult to turn that into an attack on transgender men and women, you are underestimating our archbishop.   Quicker than you could say Caitlyn Jenner, who became a news sensation by adopting a female identity after living most of her life as Olympic champion Bruce Jenner, Cordileone was off. As reported by the Washington Post, Cordileone said at the beginning of his speech, “The clear biological fact is that a human being is born either male or female.” For starters, that is demonstrably not true. A 2011 report by ABC News said research shows that 1 in every 2,000 children born each year has “ambiguous genitals,” meaning doctors and parents must make a choice. Mason J., a transgender male who lives in San Francisco, lived the experience. “They believed I was going to lead an easier life as a woman, so I was assigned,” he said. “At 22, I changed from legally female to legally male.” But there’s something deeper and more mean-spirited about Cordileone’s comments. Once he veered off the topic of Latin Mass, he told an audience of about 200 that “more and more gender identities are being invented.” He said he’d recently been told that a major university announced it had housing for “a grand total of 14 different gender identities.” And, he added to laughter from the audience, “I’m sure even more will be invented as time goes on.” Mason J. said: “I hear he kind of made a stand-up routine out of it. It makes me angry.” Risk of suicide The insensitivity is incomprehensible. According to the U.S. Centers for Disease Control and Prevention, lesbian, gay, bisexual and transgender teenagers are about twice as likely to attempt suicide as their heterosexual peers. Not funny. Picking on the transgender community is even more reprehensible. Although we often hear that gays and lesbians don’t have a choice in their sexual identity, those who are transgender must make a difficult, very public choice. And once the life-changing decision has been made, the tribulations are far from over. Acceptance of transgender men and women is consistently lacking. “No one wakes up in the morning and says, ‘You know what I’d like to do today? Feel like a second-class citizen for the rest of my life,’” Mason J. said. “Some of the things I have had to contend with I wouldn’t wish on my worst enemy. Not even the archbishop.” Cordileone, who is now being called a “culture warrior” in media accounts, picked this fight intentionally. Since he arrived here more than two years ago, he has called homosexuality “gravely evil,” attempted to insert a “morality clause” in teacher handbooks at local Catholic schools, and supported a national demonstration against same-sex marriage. Facing widespread criticism, Cordileone appeared to be backing down. He didn’t attend this year’s March for Marriage in Washington, D.C., as he has in the past, and removed the term “gravely evil” from the latest version of the teacher handbook. But this week he doubled down with this gratuitous swipe at the transgender community. The more Cordileone forces his reactionary agenda on his San Francisco parish, the more the debate boils down to one question — how are these people hurting him or the Catholic Church? ‘Just acknowledge us’ Same-sex couples routinely raise children, some of whom attend San Francisco Catholic schools. And transgender men and women have their own lives to live. They’re not interested in his agenda. If anything, they hope to be left alone. “It is so interesting that he is fixated on what we might be doing,” Mason J. said. “How am I hurting him? How can I bring down the Catholic Church? We are not running through the streets trying to corrupt children. You don’t have to agree with how we live our lives or support us, but just acknowledge us.” It is such a difficult and wrenching decision to transition sexual identity. Outsiders must wonder why someone would endure the process. It is, Mason J. says, because he feared he couldn’t survive otherwise. “My mom often says she is more appreciative to have a living son than a dead daughter,” he said. That’s no joke, archbishop.
Posted by Mike at 6:58 PM