An isolated Nienstedt tried to limit investigation into himself 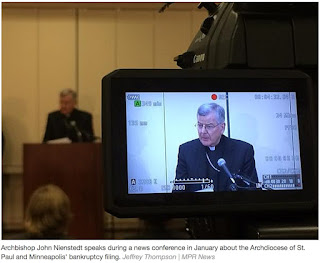 On April 10, 2014 — seven months into the clergy sex abuse scandal — Archbishop John Nienstedt's top advisers gathered for a private meeting. They had just received several affidavits from an internal investigation of Nienstedt that had been authorized by the archbishop himself to address damaging rumors. The sworn statements accused Nienstedt of inappropriate behavior, according to people who read them, including sexual advances toward at least two priests. • The unraveling of an archbishop Private investigators had even arranged a prison interview with Curtis Wehmeyer, the former priest at the center of the clergy sex abuse scandal. Wehmeyer, who pleaded guilty in 2012 to child sex abuse, told the investigators he couldn't understand why Nienstedt wanted to spend time with him or why he kept him in ministry. Nienstedt made him uncomfortable, he said, and they never had sex. Wehmeyer said he wasn't interested in Nienstedt. • July 2014: Archbishop authorized secret investigation of himself Nienstedt had authorized the investigation with the expectation that it would clear his name. Instead, it threatened to ruin it. At the meeting last spring, the advisers went around the room. Each said Nienstedt should resign. A few days later, Auxiliary Bishops Lee Piche and Andrew Cozzens traveled to Washington to bring that message to the pope's ambassador to the United States, Archbishop Carlo Maria Vigano, the apostolic nuncio. It was a brave move that threatened the careers of both men. Piche and Cozzens had hoped Vigano would agree that the future of the archdiocese was more important than the reputation of one man. What happened at that meeting is unknown. Piche, Cozzens and Vigano did not respond to interview requests. However, when the bishops returned to Minnesota, everything changed. The investigation, as it was originally ordered, was over. Nienstedt would stay in power another 14 months after choosing to curtail and diminish efforts aimed at uncovering the truth about his private life, efforts that reached the highest levels of the Catholic Church in the United States. At one point he accused an investigator of bias for disagreeing with him on same-sex marriage. The investigation brought significant costs, as well: The Archdiocese of St. Paul and Minneapolis paid hundreds of thousands of dollars for it, and it destroyed Nienstedt's reputation among the clergy. In the end, his efforts weren't enough. He would become increasingly isolated and desperate as his closest advisers turned against him. And on Monday, the Vatican announced that Nienstedt had resigned. Piche, one of the two bishops who met with the nuncio last year, stepped down the same day. -------------------- [ This is a long and complete description of events leading up to the resignation of Archbishop Nienstedt. It is well worth reading in its entirety at the MPR site ]
Posted by Mike at 9:36 AM