Ahead of Pope Francis' visit, a musical schism in the Philadelphia archdiocese 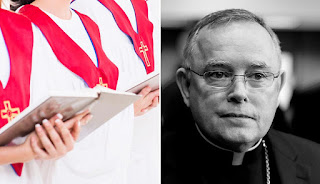 Deep in a list of “liturgical music happenings” late last month was this curious announcement: John Romeri, music director of the Archdiocese of Philadelphia, was leaving just a few months before Pope Francis’ visit. Even more curious was his reasoning: He says he’d clashed with Archbishop Charles Chaput. “This Holy Week, while [including] some of the most beautiful liturgies I have ever conducted, was not well received by the archbishop,” Romeri wrote. “This is the continuation of several years of discontent on his part with the Liturgical Music at the Cathedral and at Archdiocesan liturgies. There are simply irreconcilable differences in our understanding of the role of music in the Liturgy and the role of the choir.” Romeri’s departure is effective June 30th; he’ll stay on at the Cathedral Basilica as music director and organist until a replacement is found. Local Catholic insiders say the dispute has indeed been long-simmering, starting not long after Chaput was appointed head of the archdiocese in July 2011. Romeri spent 18 years as music director of the Archdiocese of St. Louis before leaving for the Philadelphia job in 2010. Romeri was vice chair of the liturgical music committee for the World Meeting of Families in September, which will be punctuated by a visit from the pope on September 26th and 27th. Karen Banos, a violinist who has been playing for Romeri since he arrived in Philadelphia, says the dispute was particularly evident the week leading up to Easter. "When we had Easter services for Holy Week, after literally every service Chaput was saying that [Romeri] should be fired," Banos says. "After the chrism mass [on Holy Thursday], Chaput said, 'You might not be coming back for Easter.’” "John Romeri’s decision to resign effective later this month was entirely his own," says Ken Gavin, director of communications for the Archdiocese of Philadelphia. "As it is a personnel matter, we won’t be discussing it further." Romeri did not respond to a request for comment. Chaput and Romeri have different views of the role of liturgical music. Instrumentalists who have played for him say Romeri prefers conservative (classical) church music while Chaput wants to go in a contemporary direction. "Romeri is said to have more of a ‘high Church’ sensibility in liturgy than Chaput, who has expressed a preference for the newer Mass in English and simpler styles of worship," Religion News Service's David Gibson wrote. "While Chaput is often described as a doctrinal and cultural conservative, in the Catholic Church, that does not necessarily equate with liturgical traditionalism, which is its own distinct — and proud — brand." Romeri's supporters seem particularly upset. In a post to the Archdiocesan Choirs of Philadelphia Facebook page on May 1st, James Pavlock — who sang for the choir — had high praise for Romeri. "For the past year, I have been a member of the Archdiocesan Choir and have looked forward with anticipation [to] every Monday night practice with John," he wrote. "His energy, enthusiasm and sense of humor is infectious. John has demonstrated time and time again his commitment to bettering the sacred music program in the Diocese." Banos, an accomplished musician who plays with Philly Pops, the Opera Company of Philadelphia and the Pennsylvania Ballet and is a founder of the Rittenhouse String Quartet, began playing for Romeri not long after he arrived in Philadelphia. (A real estate agent showing Romeri a condo suggested he hire Banos.) She also had kind words for him. "It seems like more often than not I find people are really devout in their faith and they're pretty good musicians," Banos says. "Or they're really good musicians, but they just happen to be of that faith. Dr. Romeri was both. There was not one piece of music that he did that wasn't relevant." But, Banos says, Chaput disagreed with his style. "When we would play the Christmas Eve masses, it's standing room only in the Cathedral and people would just sit there to [the end] and jump to their feet and applaud," she says. "He would do that and the next day Chaput would say something like, ‘Yeah, I hated everything.’” Romeri was the vice-chair of the liturgy committee (and the liturgical music sub-committee) for the upcoming World Meeting of Families. The chair of those committees is Rev. Gerald Dennis Gill, the director of the archdiocese's Office for Divine Worship and the rector for the Cathedral Basilica. "A change like this ahead of the papal visit must be causing a mini-meltdown in the Archdiocese," Nathan Chase wrote at the Pray Tell blog. Banos says that, despite Romeri's previous experience with papal visits — he was in St. Louis when the pope visited in January 1999 — he was essentially thrust into a "wingman" position for the Philly pope visit. According to Banos, the World Meeting of Families is planning to have the Philadelphia Orchestra play for the pope when he visits, rather than regular church musicians. "I can offer assurance that everything will be prepared and in order for the Holy Father’s visit later this year," Gavin, the archdiocese spokesman, says, "including liturgical music."
Posted by Mike at 7:52 PM