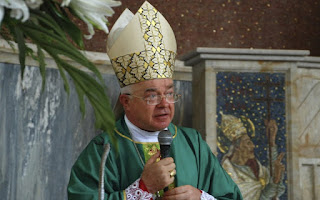 A former Vatican nuncio will stand trial in a Vatican court on charges of the sexual abuse of minors and possession of child pornography. Jozef Wesolowski, the laicised former nuncio to the Dominican Republic, is accused of “a number of offences” committed between 2008 and the date of his arrest in September 2014. Giuseppe Dalla Torre, president of the tribunal of Vatican City State, ordered the trial, the Vatican announced today. The first hearing will be held on July 11. “The serious allegations will be scrutinised” by the Vatican City State’s judicial system, “which will be assisted by both technical appraisals of the IT systems used by the defendant and, if necessary, international legal co-operation for the evaluation of testimonial evidence from the competent authorities in Santo Domingo,” the Vatican’s written statement said. The former archbishop is accused of sexually abusing minors during the years he spent as nuncio to the Dominican Republic and apostolic delegate to Puerto Rico from the date of his appointment in 2008 until his resignation on August 21, 2013. The charge of possession of child pornography is an allegation based on the archbishop’s activity once he was back in Rome, the Vatican said. The evidence was collected from the period spanning the time he was ordered by Pope Francis back to the Vatican in 2013 until the day of his arrest (September 22, 2014). Wesolowski was dismissed from the clerical state in June 2014 after a separate investigation by the Congregation for the Doctrine of the Faith. Vatican City State authorities carried out their own criminal investigation, which included a number of sessions of interrogating the former archbishop. The criminal charges against the Polish national were possible after Pope Francis approved new and expanded criminal laws, which became applicable to all Vatican employees around the world. Any direct employee of the Holy See, which includes those working in a Vatican office or nunciature, can face a criminal trial at the Vatican as well as face criminal prosecution in the country where the crimes occurred. The new amendments, which went into effect in September 2013, also brought Vatican law into detailed compliance with several international treaties the Vatican has signed. In complying with the UN Convention on the Rights of the Child, the Vatican’s new laws defined and set out penalties for specific crimes against minors, including child prostitution, sexual violence against children and producing or possessing child pornography. Previously, those specific crimes would have been dealt with under more generic laws against the mistreatment of minors; the old laws did not contemplate, for example, the crime of child pornography. The sex abuse accusations against Wesolowski, which were alleged to have occurred prior to 2013, will be tried according to the old laws, the Vatican said. Vatican City civil laws are separate from the universally applicable canon law, norms and sanctions, which require bishops around the world to turn over to the Congregation for the Doctrine of the Faith cases of priests accused of child sexual abuse or possession of child pornography. The canonical penalties include the possibility of the priest being expelled from the priesthood. The order for the former nuncio’s Vatican trial comes just a few months after the sentencing of the related case of the former Polish priest, Wojciech Gil. Gil was sentenced on March 25 by a court in Poland to seven years in jail after being convicted of sexually abusing children in Poland and the Dominican Republic. Gil had been arrested in February 2014 during a home-visit to Krakow. A Warsaw court spokesman, Przemyslaw Nowak, had said the case against Gil was linked to investigations into crimes by Wesolowski while he served as nuncio. Gil spent a decade as a parish priest in the Dominican Republic. The 10 charges filed against Gil followed testimony from more than 100 witnesses and covered sexual offenses over a 12-year period as well as counts of child pornography and illegal possession of ammunition. Gil had been suspended from active ministry in May 2013.
Posted by Mike at 3:52 PM