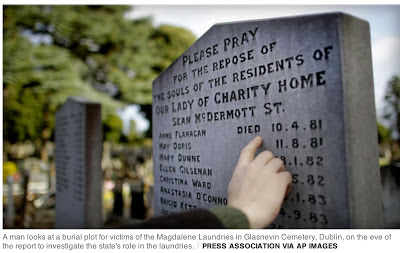 Ireland has admitted some responsibility for workhouses run by Catholic nuns that once kept thousands of women and teenage girls against their will in unpaid, forced labor. The apology comes after an expert panel found that Ireland should be legally responsible for the defunct Magdalene Laundries because authorities committed about one-quarter of the 10,012 women to the workhouses from 1922 to 1996, often in response to school truancy or homelessness. "To those residents who went through the Magdalene Laundries in a variety of ways, 26 percent of the time from state involvement, I am sorry for those people that they lived in that kind of environment," said Prime Minister Enda Kenny on behalf of the Irish government, according to Reuters. Survivors said they were unsatisfied with the prime minister's response. Steven O'Riordan, spokesperson for Magdalene Survivors Together, told Irish paper The Journal the apology was a "cop out." Ireland stigmatized those that had been committed as "fallen" women - prostitutes - but most were simply unwed mothers or their daughters. The report found that 15 percent lived in the workhouses for more than five years, and police caught and returned women who fled. They endured 12-hour work days of washing and ironing. The state apology could pave the way for payments to survivors.
Posted by Mike at 4:40 PM