Gomez, Mahony : a study in contrasts 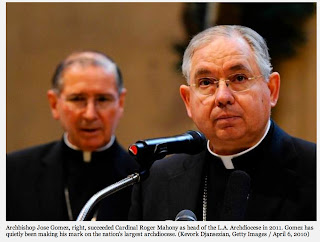 In more than two decades leading the Los Angeles Archdiocese, Cardinal Roger Mahony headlined immigration rallies, marched for worker rights and made national news by announcing he would defy a congressional bill he regarded as anti-immigrant. But the man who replaced him in 2011 — Archbishop Jose Gomez — has shied away from such attention-getting actions. Instead, he plans to take 60 conservative Catholic business leaders on a spiritual pilgrimage to the Shrine of Our Lady of Guadalupe in Mexico City this fall in hopes of winning them over on immigration reform. It's a distinctly different style from that of Mahony, whom Pope John Paul II nicknamed "Hollywood" for his frequent media appearances. "Cardinal Mahony was pretty much everywhere," said parishioner Carlos De Leon as he departed from Ash Wednesday Mass at the Cathedral of Our Lady of the Angels last week. "Archbishop Gomez seems much more behind the scenes. It's a different management style." Yet Gomez has begun quietly making his mark on the archdiocese, the nation's largest with 4.5 million Roman Catholics in 120 Southern California cities. He has elevated issues such as opposition to abortion and euthanasia. He has promoted evangelization and religious education and embraced more conservative voices. At the same time, he has not led an ideological purge of the archdiocese as some liberals had feared might happen under a cleric associated with the orthodox Opus Dei organization. Gomez has not, for instance, shut down a program Mahony developed that has trained lay leaders, particularly women, for powerful church roles, said Claire Henning, a pastoral associate at St. Paul the Apostle Church in Westwood. "I was one of the first to say, 'Oh my God, Opus Dei,'" Henning said. "But I've been very impressed. I had a lot of presuppositions about him which were wrong." One of Gomez's most ambitious initiatives has largely gone unnoticed in English-speaking Los Angeles: active outreach to Latinos, who comprise 70% of archdiocese members and 60% of Catholics under the age of 35 nationwide. The archbishop has launched a weekly Spanish-language radio and TV show to teach the faith, covering such topics as marriage and respect for life, that reaches an audience of more than 2 million. The 61-year-old Mexico native has also attended popular Spanish-language gatherings — Our Lady of Guadalupe celebrations at the L.A. Memorial Coliseum and a Divine Mercy conference at the L.A. Convention Center, for instance. ........ Gomez believes Catholics must first know their faith to understand the theological reasons for taking stands on social issues, said Father Virgilio Elizondo, a longtime friend in San Antonio, where Gomez previously served as archbishop. .... "He's concerned about social justice but feels if you're not well-grounded in the basics, then it can be seen as just activism and not … evangelization of the Gospel," Elizondo said. .... Some conservatives say he hasn't gone far enough. It irks some of them that he has not yet rid the archdiocese's annual Religious Education Congress — the world's largest gathering of Catholic workshops and exhibits, scheduled for this week — of speakers who promote such causes as gay rights and other causes they consider anti-Catholic. Still, Gomez has welcomed conservatives who say they were shut out by Mahony in years past, such as Terry Barber, a Covina-based producer and distributor of multimedia Catholic educational material. Barber said he was told by Mahony's theologian that he was too conservative and didn't fully embrace Catholic theology. ........ "He doesn't come in and bulldoze what was here but adds to the mix," said John Allen, senior correspondent for the National Catholic Reporter. In light of his quiet style, parishioners were stunned last month when Gomez publicly rebuked Mahony in a letter released alongside a raft of documents on the church's mishandling of the sex abuse crisis. The documents showed that Mahony plotted with other church officials to prevent police from investigating priests accused of molesting children. In the Jan. 31 letter, Gomez said he was relieving his predecessor of "any administrative and public duties," although he later clarified that Mahony remains a bishop in good standing. Gomez's action was seen as an unprecedented public rebuke of Mahony — and friends said it was uncharacteristic. "His style is subtle, careful and cautious," said Tim Busch, an Orange County businessman and close friend of Gomez. "He is much more soft in style and doesn't want to offend anyone. He knows where he wants to go, but he's going to take his time getting there." On Friday, Gomez sent out a new letter urging parishioners to pray for Mahony as he goes to Rome to help select a new pope. He said Mahony's accomplishments and experience with such issues as immigration and social justice would "serve the College of Cardinals well" during deliberations to elect a new pope. Gomez declined an interview request. ......... Some priests find Gomez enigmatic — a "mystery man," as Father Paul Lannan of St. Paul the Apostle church put it. Others say that with his gracious manner, Gomez puts people at ease. "He's very warm and has a self-deprecating humor," said Father Scott Santarosa of Dolores Mission Church in Boyle Heights, "which goes a long way with a lot of people." One joke has particularly endeared him to Angelenos: He has said that his Lenten sacrifice was giving up allegiance to the San Antonio Spurs in favor of the Lakers. Full article at the Los Angeles Times
Posted by Mike at 8:50 AM