Cardinal Mahony relieved of duties over handling of abuse 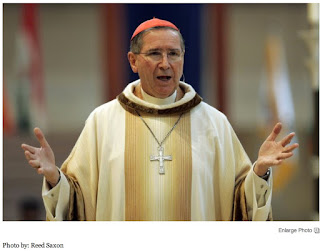 In a move unprecedented in the American Catholic Church, Los Angeles Archbishop Jose Gomez announced Thursday that he had relieved his predecessor, Cardinal Roger M. Mahony, of all public duties over his mishandling of clergy sex abuse of children decades ago. Gomez also said that Auxiliary Bishop Thomas J. Curry, who worked with Mahony to conceal abusers from police in the 1980s, had resigned his post as a regional bishop in Santa Barbara. The announcement came as the church posted on its website tens of thousands of pages of previously secret personnel files for 122 priests accused of molesting children. "I find these files to be brutal and painful reading. The behavior described in these files is terribly sad and evil," Gomez wrote in a letter addressed to "My brothers and sisters in Christ." The release of the records and the rebuke of the two central figures in L.A.'s molestation scandal signaled a clear desire by Gomez to define the sexual abuse crisis as a problem of a different era — and a different archbishop. "I cannot undo the failings of the past that we find in these pages. Reading these files, reflecting on the wounds that were caused has been the saddest experience I've had since becoming your Archbishop in 2011," Gomez wrote. The public censure of Mahony, whose quarter-century at the helm of America's largest archdiocese made him one of the most powerful men in the Catholic Church, was unparalleled, experts said. "This is very unusual and shows really how seriously they're taking this. To tell a cardinal he can't do confirmations, can't do things in public, that's extraordinary," said the Rev. Thomas Reese, a Jesuit priest and Georgetown University fellow. An archdiocese spokesman, Tod Tamberg, said that beyond canceling his confirmation schedule, Mahony's day-to-day life as a retired priest would be largely unchanged. He resides at a North Hollywood parish, and Tamberg said he would remain a "priest in good standing." He can continue to celebrate Mass and will be eligible to vote for pope until he turns 80 two years from now, Tamberg said. The move further stained the legacy of Mahony, a tireless advocate for Latinos and undocumented immigrants whose reputation has been marred over the last decade by revelations about his treatment of sex abuse allegations. Before Gomez's announcement, Mahony had weathered three grand jury investigations and numerous calls for his resignation. He stayed in office until the Vatican's mandatory retirement age of 75. No criminal charges have been filed against Mahony or anyone in the church hierarchy. Terrence McKiernan, president of bishopaccountability.org, said that in a religious institution that values saving face and protecting its own, Gomez's decision to publicly criticize an elder statesman of the church and his top aide was striking. "Even when Cardinal [Bernard] Law was removed in Boston, which was arguably for the same offenses, this kind of gesture was not made," he said. Law left office in 2002 amid mounting outrage over his transfer of pedophile priests from parish to parish, but the church presented his departure as of his own accord and he was later given a highly coveted Vatican job in Rome. Bishop Thomas J. O'Brien of Phoenix relinquished some of his authority in a deal with prosecutors to avoid criminal charges for his handling of abuse cases, but he kept his title and many of his duties. A Kansas City bishop convicted last year of failing to report child abuse retained his position. The Rev. Thomas Doyle, a canon lawyer and Dominican priest who has testified across the nation as an expert witness in clergy sex abuse cases, said the Vatican would have "absolutely" been consulted on a decision of this magnitude. "This is momentous, there is no question," he said. "For something like this to happen to a cardinal.... The way they treat cardinals is as if they're one step below God." Gomez's decision capped a two-week period in which the publication of 25-year-old files fueled a new round of condemnation of the L.A. archdiocese. The files of 14 clerics accused of abuse became public in a court case last Monday. They laid out in Mahony and Curry's own words how the church hierarchy had plotted to keep law enforcement from learning that children had been molested at the hands of priests. To stave off investigations, Mahony and Curry gave priests they knew had abused children out-of-state assignments and kept them from seeing therapists who might alert authorities. Mahony and Curry both issued apologies, with the cardinal saying he had not realized the extent of harm done to children until he met with victims during civil litigation. "I am sorry," he said.
Posted by Mike at 5:16 AM