Sex-abuse bill lobbying in Catholic churches is over the top 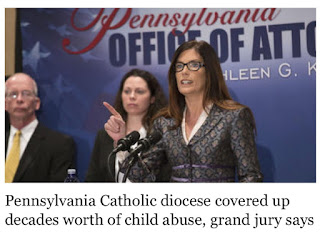 "We were dismayed to find this letter inserted in our church bulletin this past Sunday," wrote a local Catholic who contacted me last week about a letter from Allentown Diocese Bishop John Barres. Barres' letter outlined the diocese's child sex-abuse prevention efforts — and then lobbied against state legislation that would change the statutes of limitations for such cases, asking parishioners to contact their legislators about its "detrimental effects." This appeal to a captive audience fits right in with the church's furious lobbying effort, largely focused on blocking bills that would open a two-year window for civil suits by victims who are blocked by the state's restrictive statutes. Such a window has been recommended by the Pennsylvania grand juries that exposed decades of rampant child sex abuse and official cover-ups within the church. I wrote recently that the Pennsylvania Catholic Conference, which has played a big part in keeping statute-of-limitations legislation bottled up for years in legislative committees, spent $3.5 million on lobbying in Harrisburg between 2010 and 2015, according to Department of State records. The Catholic Conference's website now includes an Action Alert with a proposed email you can send to your legislators, urging them to oppose the proposed two-year window. It includes standard talking points, including complaints that sovereign immunity statutes unfairly shield public entities such as public schools. The website also carries an editorial titled "Justice Out of Balance" that makes many of the same points in Barres' letter and the proposed letters to legislators. In light of the recent Altoona-Johnstown grand jury report and similarly horrifying reports about the Philadelphia Archdiocese, it strikes me as particularly brazen to lobby in church against what victim advocates feel is the most important means of achieving justice and identifying hidden abusers. Interestingly, a letter distributed that same day in church bulletins in the Harrisburg Diocese and signed by Bishop Ronald Gainer (formerly of the Allentown Diocese) expressed sorrow at the new abuse revelations and outlined diocese efforts to prevent child abuse, as Barres did. But there was no lobbying. Informational rather than political. One of the things those grand juries have concluded is that restrictive statute-of-limitations laws make no sense in these crimes, when you consider that it so often takes decades for these victims to find the courage to speak up and that in some cases, there was a concerted institutional effort to keep them secret until the statute of limitations had expired. Under those circumstances, it's reasonable to ask the abusers — and the institutions that hid their crimes for decades, in certain cases — to shoulder the cost of treating the psychological, and even physical, aftermath. By the way, the vast majority of child sex-abuse cases have nothing to do with clergy, so the idea that these proposals are all about suing the Catholic Church is just not true, as the results of statute-of-limitations windows in other states have demonstrated. Most of the victims I've spoken to were abused by family members or family friends. They want to expose the abusers. Nonetheless, Barres warned, "Diocesan and parish resources that now support our school programs that educate and ministries that feed the hungry and serve those in need would instead be diverted to satisfy costly civil judgments. The very existence of some ministries would be threatened, and parishes and schools might be forced to defend themselves against claims that are many decades old." Scare tactics aside, the claims are decades old because the church covered them up when they happened. State Rep. Mark Rozzi, D-Berks, a longtime advocate for statute-of-limitations reform who says he was a victim of rape by his priest in the Allentown Diocese, acknowledged that Barres has been doing the right things to prevent future crimes. "But the fact of the matter is," he said, "for many years they didn't do it right. It comes down to accountability." Under heavy pressure to finally act, the House Judiciary Committee last week voted out a bill that would eliminate the child sex-abuse statute of limitations for future criminal cases and extend it from age 30 to 50 for future civil cases. It is expected to move Monday to the House floor for consideration, including amendments designed to enhance — or ruin — the bill. Unfortunately, it came out of the committee with an amendment that partially lifts sovereign immunity protection in these cases, a poison pill that deliberately muddies the waters instead of allowing a clean vote on the statutes. I'm fine with exploring the sovereign immunity question, but not as part of this, so I hope that's jettisoned. In negotiations with Republican leadership, Rozzi is offering a compromise amendment that would give all victims, including those blocked by the present law's cutoff at age 30, until 50 to file suit. This wouldn't help survivors older than 50, as the two-year window would, but it's still a big step forward, so I'm in favor if it helps get the bill passed. I agree with the Catholic Conference on one thing, at least. Justice is out of balance. It's time to fix that.
Posted by Mike at 7:00 AM