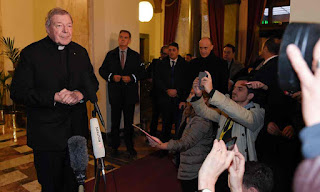 When George Pell dumped on Melbourne’s Catholic Education Office in March the question was: would the church strike back or hunker down behind the cardinal? On Wednesday the royal commission into institutional responses to child sexual abuse gave the answer: strike back hard. At issue is Pell’s credit. Time and again as he has defended his record as a priest in Ballarat and bishop in Melbourne, the cardinal’s best answer to his accusers has been: my word can be trusted against yours. That’s not looking so good now. To recap: when Pell came to Melbourne as an auxiliary bishop in 1987 there was an erratic and violent priest called Peter Searson terrifying children at the parish school in Doveton. He hit them. They fled screaming from the presbytery. He packed a gun. He hung round the boys’ toilet. He sat little girls on his lap during confession. He took gruesome delight in showing kids a corpse in a coffin. He stole parish funds. Father Searson was plainly nuts, but the Catholic Education Office couldn’t get rid of him. They’d run complaints up to the then archbishop of Melbourne, Frank Little, but nothing would be done. The headmaster of the school Graeme Sleeman gave the church an ultimatum: the priest had to go or he would. The church backed the priest. Sleeman never worked in the Catholic education system again. Along came Pell. Doveton was in his territory. But the new bishop did nothing effective about this vicious priest despite receiving a delegation of teachers complaining about him in 1989 and another of parents in 1991. Searson would stay in Doveton for eight more years until he bashed another altar boy whose parents went to the police. Pell was archbishop when the priest was finally sacked in 1997. But why did he do nothing in the early years? Giving evidence from Rome in March, the cardinal put much of the blame on the Catholic Education Office. He declared himself the victim of a coverup. He told the royal commission that when it came to Father Searson, the office had given him “no adequate background briefing on the long-term problems at all”. Why? To protect the office, he told counsel assisting the commission, Gail Furness SC. And to protect the archbishop. “I was a new boy on the block. I was known to be capable of being outspoken. They might have been fearful of just what line I – I would take when confronted with all the information. They were very keen to keep the lid on the situation.” Furness called that story implausible at the time. Now four retired executives of the Catholic Education Office have come to the royal commission to describe their shock, surprise, disappointment and anger at Pell’s evidence. “Our number one priority for the Catholic Education Office for some period of time was that something would happen which led to the removal of Searson from Doveton,” said Peter Annett, a former supervisor with the office. “I would have thought that our staff would be completely frank with Bishop Pell and be cheering from the rooftops if he was able to do anything.” All four men and women said the same thing: there was no conspiracy to deceive Pell, no understanding to keep the lid on the Searson scandal, and no reason to soft-pedal the ongoing crisis in Doveton. They wanted Searson gone but Pell was no help. These four veterans of church bureaucracy were represented before the commission by lawyers for the Archdiocese of Melbourne. They were giving their evidence with the full backing of the church. Not that their efforts to get rid of Searson were particularly impressive. Sitting in the gallery to hear their evidence was Graeme Sleeman, the former Doveton headmaster. He ridiculed their claim that dealing with this priest was the top priority of the Catholic Education Office. He told the Guardian: “That’s fucking bullshit.” Even so, Pell’s accusation that the office set out to deceive him seems now to lie in ruins. And if he can’t be believed here, can the elaborate accounts of his ignorance of paedophile scandals in Ballarat be believed? And what about, his crucial denial that he offered young David Ridsdale an inducement not to report to the police his abuse at the hands of his uncle, the notorious paedophile Gerald Ridsdale? All the evidence against Pell in relation to his Melbourne career has now been heard. Between now and August the royal commission has to decide one fundamental question: is Cardinal Pell a man of his word?
Posted by Mike at 12:59 PM