Latest attack on Christians in India confirms climate of fear 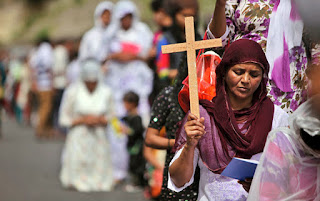 A second attack in two months on Pentecostal Christians in the central Indian state of Chhattisgarh, a fast-developing region known for electricity and steel, brings into sharp focus the insecurity facing the miniscule Christian minority in India, as well as the climate of impunity for radical Hindu groups menacing them. Over the weekend of April 16-17, a pastor, his pregnant wife and his family fled from their house in a Chhattisgarh village called Tokapal Tehsil in the Bastar district, after the house was torched by alleged members of a militant Hindu group. Reports state that the assailants ransacked the pastor’s church, and then tried to set the family on fire when they refused to chant a cry of praise to a Hindu god. Saturday night, the unidentified assailants barged into the house church armed with rods and knives. They also entered the church and assaulted Pastor Dinbandhu Sameli, his 7-month pregnant wife, and his daughter Roushni Vidya. According to the reports, the attackers wielded a sword at his wife and vandalized the church. During the course of the assault, they poured gasoline on the pastor and his wife for refusing to say “Jai Sri Ram”, or “Victory to Lord Rama!” Sameli and his family eventually managed to escape, and informed local police of the attack. The police rushed to the spot and lodged a complaint against a number of unidentified assailants. Speaking exclusively to Crux, Arun Pannalal, president of the Chhattisgarh Christian Forum, complained of what he called the “organized attacks” in Chatiisgarh’s Tribal districts, referring to areas largely populated by “Tribals,” meaning members of India’s indigenous ethnic groups. Long considered to stand outside the traditional caste system, Tribals tend to be the most impoverished and marginalized group in the country. Christianity has grown rapidly among the Tribals, in part because it’s seen as a form of both spiritual and social emancipation. “These are not isolated incidents, they are well-organized attacks with a pattern to harass and intimidate the vulnerable Christian community,” Pannalal said. “This is part of a well-planned conspiracy, we condemn it and demand an impartial probe and speedy investigation in the case.” Pannalal said that from March 2013 to 2014, there were 42 such assaults against Christians in Chhattisgarh, and in the same period from 2014 to 2015 that total rose to 51. One chronic source of difficulty for local Christians is a group known as “Dharam Sena,” meaning “Protectors of Hinduism,” which is linked to the Vishva Hindu Parishad, one of several Hindu nationalist movements in India. India’s current Prime Minister, Narendra Modi, came into power backed by those Hindu nationalist groups, and Christians in the country generally say the harassment of minority groups has become more widespread and brazen under Modi. Although a police investigation of the latest incident in Chhattisgarh is underway, Pannalal expressed scepticism that they’re serious about it, scoffing at claims that the attackers remain “unidentified.” “Everyone knows everyone else in Tokapal,” he said. The same village was in the news in March 2015, when the local arm of the VHP imposed a ban on the entry of non-Hindu missionaries, especially Christians and their “religious propaganda,” and also prohibited Christians from praying or speaking in public. Earlier this year, 34 American lawmakers expressed concern over the treatment of Christians in the Bastar District of Chhattisgarh State, and urged the Indian government to take immediate steps to ensure that “the fundamental rights of religious minorities are protected and that the perpetrators of violence are held to account.” Among others, the letter was signed by U.S. Senators Roy Blunt (R-MO), Amy Klobuchar (D-MN), James Lankford (R-OK), Al Franken (D-MN), Tim Scott (R-SC), Ben Sasse (R-NE), John Boozman (R-AK) and Steve Daines (R-MT). The letter was also signed by 24 members from the U.S. House of Representatives. Addressed to Modi on February 25, the letter urged him to control the activities of militant Hindu nationalist groups such as the Rashtriya Swayamsevak Sangh (RSS), and to instruct Indian security forces “to enforce the rule of law and to protect minority communities from religiously-motivated harassment and violence.” Referring to the ban on non-Hindu activity imposed by the VHP, the letter said the Christian minority has been “dramatically affected.” “Effectively, it has criminalized the practice of Christianity for an estimated 300 Christian families in the region,” it said. “Since the ban was implemented, Christians reportedly have been subjected to physical assaults, denial of government services, extortion, threats of forced expulsion, denial of access to food and water, and pressure to convert to Hinduism.” Activists in India say that physical assaults and harassment against Christians, generally carried out by radical Hindu groups, have become depressingly routine. John Dayal, a lay Catholic who heads a group called the “United Christian Forum for Human Rights,” says that since 1997, Christians in India have experienced between 150 and 350 cases of violence a year, meaning an average of one almost every other day.
Posted by Mike at 8:05 PM