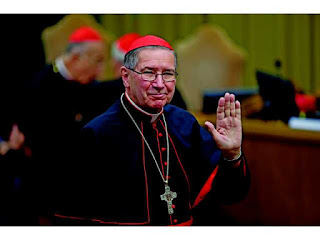 After heightened media attention and backlash from the community, the L.A. Archdiocese has replaced retired L.A. Cardinal Roger Mahony at Saint Kateri Catholic Church’s April 29 confirmation ceremony. Auxiliary Bishop Alexander Salazar, who conducted the ceremony at Our Lady of Perpetual Help last week, will conduct the ceremony, Saint Kateri officials said. “We want to focus on the confirmation candidates and celebrate the rite of confirmation,” explained Renee Fields, Director of Operations at Saint Kateri. “We want them to have a joyous experience as they complete their initiation into the Catholic Church.” Some parishioners were outraged over Mahony’s proposed involvement in the ceremony. As the head of the L.A. Archdiocese for many years, Mahony was one of the Catholic Church officials at the center of the molestation and sexual abuse allegations over many decades. While he did not take part in the abuse he often protected the priests doing the abusing, gaining the ire of many parents and Catholics alike. As community backlash over Mahony’s involvement in Saint Kateri’s confirmation ceremony grew, many parents opted to move their children to be confirmed at other Catholic parishes in Santa Clarita. Amid the growing concern, Saint Kateri issued a request to the L.A. Archdiocese calling for a new bishop to conduct the April 29 ceremony replacing Mahony. Fields emphasized the request to the L.A. Archdiocese, which was granted this week, had less to do with community backlash than church officials feeling that the focus on the meaning and celebration of the event was being diverted amid the heightened media attention surrounding Mahony’s involvement. Many parishioners and community members began offering comments and concern, bringing heightened awareness of his role in the Catholic Church sexual abuse scandal and renewed disdain from the community. “If someone has concerns about his involvement that means there’s still healing and care that has to be done,” said Fields. “In the time I’ve been at OLPH I’ve never seen [the archdiocese] change the bishop,” said Cheryl McClure, Director of Confirmation at Our Lady of Perpetual Help. She has run the program at OLPH for 16 years. The announcement noting the change was made to the parish late Thursday. “Once everyone knew the situation they stood up for what was right,” said Brooke Bambrick who initially spoke out about Mahony’s involvement. “It shows what a great community Santa Clarita is and how much we care about our kids.” An effort to reach out to the L.A. Archdiocese for comment on the change was made by The Signal but by late Thursday the Archdiocese had not responded.
Posted by Mike at 10:01 PM