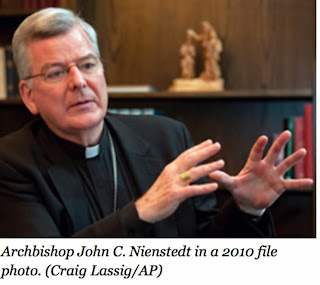 The controversial former Minnesota archbishop who came to Battle Creek to assist the Rev. John Fleckenstein is departing immediately, St. Philip Catholic Church parishioners were informed today. A letter from Fleckenstein to parishioners dated Thursday said Archbishop John Nienstedt chose to leave in the face of concerns from churchgoers, and Fleckenstein agreed. Nienstedt had resigned last summer as archbishop of the Archdiocese of St. Paul and Minneapolis,10 days after the archdiocese was criminally charged for its leaders' handling of allegations of sexual abuse by its priests. One, Curtis Wehmeyer, pleaded guilty to sexually abusing two boys and possessing child pornography; he's serving a five-year prison sentence. A longtime friend of Fleckenstein, Nienstadt offered to help out at St. Philip while Fleckenstein underwent health treatments. He was to serve here for six months. Some parishioners expressed concern about the safety of children in the church in the presence of a leader who had resigned in the face of the Minnesota scandal. In his letter to parishioners today, Fleckenstein wrote: "I wish to inform you that Archbishop John Nienstedt has decided to discontinue his pastoral assistance for St. Philip Parish, effective immediately. After discussions with the Archbishop conveying the expressed concerns by the faithful people of our community, he offered to withdraw from the diocese and I agreed. Archbishop Nienstedt has a deep concern for the Church, and in light of the unintended discord that his presence was causing, he decided that this would be the best course of action so the Church can remain focused on its mission. At the same time, the Archbishop shared with me the deep gratitude he has for the hospitality he received from so many of our parishioners." The letter continues: "A very regrettable circumstance of Archbishop Nienstedt’s presence within our community has been anger and fear. I’m proud of the good works of our parishes and our Catholic schools as well as our valuable place in our community. I wish for us to continue growing and striving. My hope is that we can move forward together. "I wish Archbishop Nienstedt well and I know many of you do as well. In this Jubilee Year of Mercy, as called for by Pope Francis, I pray we may find peace, support, and healing for ourselves and with each other, and that we continue to care for all people with charity."
Posted by Mike at 3:28 PM