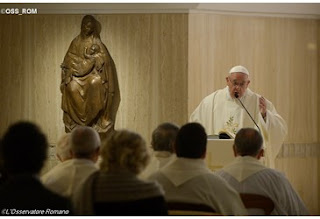 Christians who say “it’s always been done that way,” and stop there have hearts closed to the surprises of the Holy Spirit. They are idolaters and rebels will never arrive at the fullness of the truth. That was the message of Pope Francis at Mass on Monday morning at the chapel in the Casa Santa Marta. In the first reading, Saul was rejected by God as King of Israel because he disobeyed, preferring to listen to the people rather than the will of God. The people, after a victory in battle, wanted to offer a sacrifice of the best animals to God, because, he said, “it’s always been done that way.” But God, this time, did not want that. The prophet Samuel rebuked Saul: “Does the Lord so delight in burnt offerings and sacrifices as in obedience to the command of the Lord?” Jesus teaches us the same thing in the Gospel, the Pope explained. When the doctors of the law criticized Him because His disciples did not fast “as had always been done,” Jesus responded with these examples from daily life: “No one sews a piece of unshrunken cloth on an old cloak. If he does, its fullness pulls away, the new from the old, and the tear gets worse. Likewise, no one pours new wine into old wineskins. Otherwise, the wine will burst the skins, and both the wine and the skins are ruined. Rather, new wine is poured into fresh wineskins.” “What does this mean? That He changes the law? No! That the law is at the service of man, who is at the service of God – and so man ought to have an open heart. ‘It’s always been done this way’ is a closed heart, and Jesus tells us, ‘I will send you the Holy Spirit and He will lead you into the fullness of truth.’ If you have a heart closed to the newness of the Spirit, you will never reach the full truth. And your Christian life will be a half-and-half life, a patched life, mended with new things, but on a structure that is not open to the voice of the Lord—a closed heart, so that you are not able to change others.” This, the Pope emphasized, was the sin of Saul, for which he was rejected by God. “It is the sin of so many Christians who cling to what has always been done and who do not allow others to change. And they end up with half a life, [a life that is] patched, mended, meaningless.” The sin, he said, “is a closed heart,” that “does not hear the voice of the Lord, that is not open to the newness of the Lord, to the Spirit that always surprises us.” This rebellion, says Samuel, is “the sin of divination,” and obstinacy is the sin of idolatry: “Christians who obstinately maintain ‘it’s always been done this way,' this is the path, this is the street—they sin: the sin of divination. It’s as if they went about by guessing: ‘What has been said and what doesn’t change is what’s important; what I hear—from myself and my closed heart—more than the Word of the Lord.’ Obstinacy is also the sin of idolatry: the Christian who is obstinate sins! The sin of idolatry. ‘And what is the way, Father?’ Open the heart to the Holy Spirit, discern what is the will of God.” Pope Francis noted that in Jesus’ time, good Israelites were in the habit of fasting. “But there is another reality,” he said. “There is the Holy Spirit who leads us into the full truth. And for this reason he needs an open heart, a heart that will not stubbornly remain in the sin of idolatry of oneself,” imagining that my own opinion is more important than the surprise of the Holy Spirit. “This is the message the Church gives us today. This is what Jesus says so forcefully: ‘New wine in new wineskins.’ Habits must be renewed in the newness of the Spirit, in the surprises of God. May the Lord grant us the grace of an open heart, of a heart open to the voice of the Spirit, which knows how to discern what should not change, because it is fundamental, from what should change in order to be able to receive the newness of the Spirit.”
Posted by Mike at 1:45 PM