Fr. Anthony Ruff, OSB Pray Tell January 21, 2016 Pope Francis made the news, and raised eyebrows, when he washed the feet of women, including non-Christians, at Holy Thursday Mass immediately after being elected pope – not least because the rules only allowed for the feet of men to be washed. Now the Holy See has issued a decree making official what he – and many other priests around the world – had been already doing in contravention of the official rule. 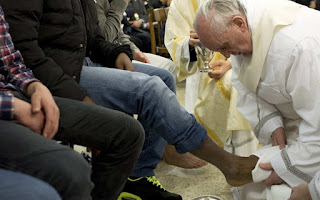 Pope Francis washes the foot of a prison inmate during Holy Thursday Mass in 2013 (CNS) The decree was issued today by the Congregation for Divine Worship and the Discipline of the Sacraments, the Vatican’s liturgy department which has Cardinal Robert Sarah as its head. Pope Francis also wrote a letter to Cardinal Sarah regarding the changes. As NCR reports, the previous wording about “men” is to be changed to this: Those chosen from among the People of God are accompanied by the ministers’ (and consequently in the Caeremoniale Episcoporum No. 301 and No. 299 b referring to the seats for the chosen men, so that pastors may choose a group of faithful representing the variety and unity of every part of the People of God. This group may consist of men and women, and ideally of the young and the old, healthy and sick, clerics, consecrated persons and laypeople. Look for much to be made of two words in that passage: “may” and “ideally.” Note that women may be included, but there is no obligation to do so and one may still include only males. But note that ideally the group should be diverse and representative of the People of God. But does “ideally” only refer to the second part of the sentence, and not the first part saying that women may be admitted? And then there is “People of God.” Does that include only Christians? Only Catholics? Or all God’s people of any religion (including Islam)? I also expect much discussion about how significant the change is. Is this a real turning point and a sign of significant movement at high official levels? Or is too much being made about a rather insignificant matter? Either view has merits, whatever side of the issue you’re on. And of course there is the important question of how liturgical law functions and how it should be interpreted. One school of thought says that it may well be legitimate to wash women’s feet – if the rules allow for it. According to this line of thinking, Pope Francis should have changed the rule first, and then changed the practice. Otherwise he’s modeling a cavalier attitude toward the Church’s norms. But on the other side, some people would say that Francis’s violation of a liturgical rule for pastoral reasons was itself a good model for the whole church. It sent the right kind of message to those who are overly legalistic and think that the Roman Curia ought to micromanage every liturgical practice in the whole world. For those people, we’ve now lost the sign value of a Pope admirably violating the rules for pastoral reasons. With today’s decree, rules and practice will again be in sync when Francis celebrates Holy Thursday. Be that as it may, I’m pretty sure Francis has already made clear in many ways what he thinks about people who put rules above all else
Posted by Mike at 3:21 PM