What To Do When Your Church Changes on You: The Case of Fr. Joseph Fenton 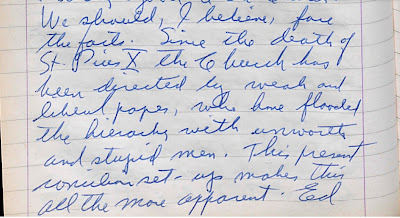 As events progressed in the course of November 1965, near the end of the final session of Vatican II, it became clearer that the proposed document was moving toward approval. Fenton wrote in his diary, “We should, I believe, face the facts. Since the death of St. Pius X the Church has been directed by weak and liberal popes, who have flooded the hierarchy with unworthy and stupid men. This present conciliar set-up makes this all the more apparent.” After much to-ing and fro-ing, with plenty of backstage politicking and what some would no doubt call “synod rigging,” the Council fathers eventually approved the declaration on religious freedom, Dignitatis humanae. The vote on December 7, 1965, the day before the close of the Council, was 2,308 in favor and 70 against. Dignitatis humanae states in its opening paragraph what it is up to: “The council intends to develop the doctrine of recent popes on the inviolable rights of the human person.” And here is the key sentence in the declaration: “This Vatican Council declares that the human person has a right to religious freedom.” It is interesting how the declaration understands the source of its teaching: This doctrine of freedom has roots in divine revelation, and for this reason Christians are bound to respect it all the more conscientiously. Revelation does not indeed affirm in so many words the right of persons to immunity from external coercion in matters religious….” The (new) teaching is not explicitly found in divine revelation, but it is enough that its “roots” are in divine revelation. This was enough to make development, indeed reversal, possible. And where was Fr. Fenton at this point? Fenton left Rome in late November so as not to have to be present for the promulgation of Dignitatis humanae. He had resigned as editor of the American Ecclesiastical Review the previous December. He became pastor of a parish in Massachusetts, and no longer expressed himself on the issue of religious liberty. He died in 1969. One can only wonder what the final years and days were like for him.
Posted by Mike at 9:42 AM