Pope Francis is victim of internal conspiracy to 'manipulate' him, Vatican alleges

Nick Squires The Telegraph October 22, 2015 The Vatican alleged on Thursday that Pope Francis was the victim of an internal plot to undermine his authority after a false story was leaked to the Italian press claiming that he was suffering from a brain tumour. The front-page story was published by Quotidiano Nazionale, an Italian daily, on Wednesday, but was indignantly denied by Vatican spokesmen. 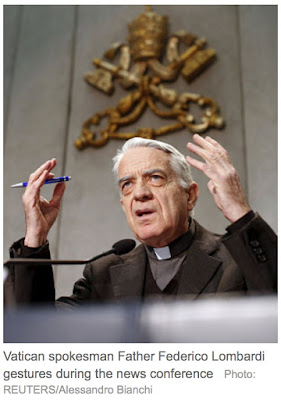 It took to new heights the atmosphere of skulduggery and Machiavellian intrigue that swirls around the Holy See at the best of times. Cardinals and others within the Catholic Church hierarchy suggested that the unfounded story about the tumour was an attempt by “enemies” of the 78-year-old Pope to discredit him and to suggest that his judgment was impaired. They said the timing of the leak was deeply suspicious – it came just days before the conclusion of the Synod, a three-week meeting of 270 bishops and cardinals at the Vatican which has been discussing delicate issues such as divorce and the Church’s attitude towards homosexuality. The bishops are due to present their final report to the pontiff on Saturday. In a forthright notice, L’Osservatore Romano, the Vatican’s own newspaper, called the story about the tumour “false” and “unfounded”. “The moment (that was) chosen reveals an attempt to raise a cloud of dust in order to manipulate," the broadsheet said. Walter Kasper, a liberal cardinal from Germany who is closely in step with the Pope’s views, said: “It's evident to me that some people don't like this Pope. Maybe they were trying to influence us (in the Synod).” “Certain people, both inside and outside the Church, are nervous about the outcome of the Synod," he said. The tumour story was an attempt to “upset” the final days of deliberation at the gathering, the cardinal said. Italian newspapers speculated about “the shadow of a plot”, alleging that it may have been the work of conservatives within the Church who are aghast at Pope Francis’s reformist agenda and the sympathetic line he has taken towards homosexuals, diverging from the traditional Vatican view that they are “intrinsically disordered”. “Who wants the Pope dead?” was the headline of Il Giornale, a conservative daily, which said the Church was “in chaos”. Whoever leaked the tumour story to Quotidiano Nazionale was aiming to undermine the “legitimacy” of the Pope, said Massimo Franco, a leading Vatican expert. “This nasty story seems to have been concocted by the enemies of Jorge Mario Bergoglio (as the Pope was known before his election in 2013) to let him know that he is in their sights,” he wrote in Corriere della Sera. The underlying aim may have been to cast doubt on the Pope’s mental acuity, insinuating that his actions and statements were a result of “his brain not functioning properly,” Mr Franco suggested. It was a “subliminal and disturbing” message that the Pope’s enemies were hoping to spread, amid a growing conservative backlash against some of his statements and decisions. Antonio Spadaro, the editor of Civilta Cattolica, a Jesuit publication, said: “After various other lies that have been put out there, they are now inventing an illness. They don’t know what else to do. They’re getting desperate.” But it remained unclear who exactly was behind the alleged plot. Most Vatican observers believed that if it really was engineered by insiders, it may have been the work of conservatives at the Synod. They have been particularly alarmed by the Pope’s suggestion that the Church should show more compassion towards Catholics who have divorced and then remarried without seeking an annulment. They are currently banned from taking Communion because the Church teaches that they are living in sin and committing adultery with their new spouses. A group of 13 cardinals wrote to the Pope during the Synod to complain that they felt it was being rigged by the pontiff in order to ensure a more liberal outcome. Victor Manuel Fernandez, a bishop from the Pope’s native Argentina, called the alleged attempt at spreading false rumours “the strategy of the Apocalypse”. It was a bid to “discredit some who is in power, to speak ill of him, to disseminate absolutely false stories about him. To speak of someone in this way shows the intention to destabilise him.” In its story, Quotidiano Nazionale claimed that the Pope had been secretly visited at the Vatican by a Japanese surgeon, who had found a benign, treatable, brain tumour. But the Holy See issued three, increasingly exasperated denials of the story and the brain cancer specialist, Dr Takanori Fukushima, released a statement saying that he had never medically examined the Pope. The Rev Federico Lombardi, the chief Vatican spokesman, said the report was “totally unfounded,” calling the story “seriously irresponsible and not worthy of attention. As all can see, the Pope continues to exercise his intense activity without interruption and in an absolutely normal way". But the newspaper continued to stand by its story. Andrea Cangini, the editor, said his journalists had worked for months to double-check the information and make sure their sources were reliable.
Posted by Mike at 8:37 PM