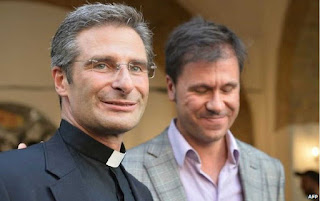 Pope Francis is due to celebrate Mass at St Peter's Basilica in the Vatican, at the start of a synod of bishops that will focus on family issues. The run-up was dominated by a row over a Vatican priest who on Saturday announced he was in a gay relationship. Poland-born Krzysztof Charamsa said he wanted to challenge the Church's "backwards" attitude to homosexuality. He was later dismissed from his post at the Vatican's office in charge of guarding Roman Catholic doctrine. A spokesman said Msgr Charamsa's decision to give interviews on the eve of the synod was "grave and irresponsible" and would put Pope Francis under "undue media pressure". In an interview with the Corriere Della Sera newspaper, the 43-year-old priest said: "It's time the Church opened its eyes and realised that offering gay believers total abstinence from a life of love is inhuman." BBC religious affairs correspondent Caroline Wyatt says the controversy has set the scene for what some fear could be a fractious three weeks. The Synod - a defining moment for Pope Francis Almost 300 Church leaders - and some lay people - will be discussing such issues as the treatment of Catholics who are gay, and how to approach couples who live together without being married or wish to take communion after being divorced. Our correspondent says the Church is unlikely to change its doctrine, but some traditionalists fear that the synod is sowing confusion about the ideals of the Catholic faith. The Pope has called for a more understanding attitude on sexual issues. There's the text and then there's the subtext. The official subject under discussion at the crucial three-week meeting of cardinals and bishops from around the world beginning at the Vatican on Sunday, chaired by Pope Francis, is how to ensure Catholic families heed Church teaching. The ban on contraception, for example, is now honoured more in its breach than in its observance. But the sudden revelation by a Polish monsignore that he is gay, has a lover, and is apparently a member of a long-rumoured but never formally acknowledged "gay lobby" at the heart of the Catholic Church, risks skewing the smooth running of a long-anticipated event. The subtext is whether the Church should relax its traditional hostility to same-sex partnerships and marriages in an age when even the Pope retorts: "Who am I to judge?" After his election in 2013, Pope Francis reaffirmed the Roman Catholic Church's position that homosexual acts were sinful, but said homosexual orientation was not. "If a person is gay and seeks God and has good will, who am I to judge?" he said. The issue of homosexuality was also highlighted during the pope's visit to the US last week. He had a private meeting with a gay former student of his and his boyfriend at the Vatican mission in Washington. The Pope also met Kim Davis, a Kentucky local official who recently gained attention for refusing to issue marriage licences to same-sex couples.
Posted by Mike at 10:36 PM