To preserve the memory of India's martyrs, someone will have to pick up the tab 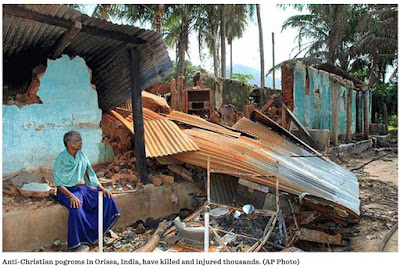 Memory might not be the end of justice for the victims of persecution, but it’s surely the beginning. If no one even remembers their suffering, there’s little basis to hope for anything else good to happen. In Catholicism, the primary way to preserve the memory of martyrs is by beatifying and canonizing them, meaning declaring them saints. A crystal-clear case for that honor can be made for the martyrs of Kandhamal in India, where violent anti-Christian pogroms in 2008 left some 100 people dead. The victims were largely Dalits, “untouchables” under the caste system, and “tribals,” meaning India’s original inhabitants — precisely the sort of people on the periphery Pope Francis so often extols. Today their sainthood cause is stalled, not because of a lack of sanctity, but rather, a lack of means. There’s no question about the heroism of their deaths. They were often burned alive, hacked into pieces, even disfigured by acid. Women were raped, and men were tortured. In one case, a Christian man had his genitals cut off and his intestines ripped out, with his attackers wearing them around like a macabre trophy. The violence was carried by out by radical Hindus wielding clubs, swords, and torches, shouting war cries that were often chillingly to the point, such as, “Kill Christians!” Seeing these martyrs of Kandhamal declared saints is “my wish and my people’s wish,” said Archbishop John Barwa of Cuttack-Bhubaneswar, the diocese where Kandhamal is located, adding that it has universal support among India’s Catholic bishops. Roughly half the 100 Christians who died were Catholics, making them eligible for a sainthood cause. Yet Barwa, who’s also the uncle of a nun raped amid the mayhem, said there is no such process underway. “We don’t have the personnel or the money for the research that’s required,” he said. “This process needs a lot of documentation, capturing the real stories.” Barwa explained that the logistical challenges are compounded by the fact that the victims were often illiterate and lacked even basic records such as birth certificates. “If I employ someone [to prepare a sainthood cause], I’d have to pay them,” Barwa said. “It’s a specialized job, and not just anybody can do it. I’m not able to employ anyone, and my priests don’t have the skills.” The story of the Rev. Bernard Digal, the lone Catholic priest to die in the 2008 riots, illustrates the memories at risk of being lost. Retired Archbishop Raphael Cheenath, who was in charge of the diocese at the time, said Digal was in Kandhamal when the house of a parish priest he was visiting was attacked. They fled to a nearby forest, where they remained three days without food and water. Eventually Digal made a break for it, leaving in a jeep with his driver. He and the driver were captured. Digal was beaten with crowbars and sticks and stripped naked, then doused with kerosene as the mob attempted to burn him alive. He tried to run away, but his attackers beat him again until he fell to the ground, blood flowing from his head, and lost consciousness. Thinking he was dead, Cheenath said, the mob abandoned Digal’s naked body. His driver came looking for him in the morning, and later informed the police. Along with a few villagers, the police took Digal to a local public health center. Eventually he was airlifted to a Mumbai hospital. Digal died two months later, on Oct. 25, 2008. Doctors had operated on him to remove a blood clot from his brain, caused by the beating. His lungs collapsed, he fell into a coma, and he passed away. Digal was 48. He’s one of seven victims memorialized on a pillar in the village of Tiangia, which was blessed by Barwa in February. Cheenath said Digal’s story is the story of all those who perished. “These 100 people, they are all martyrs,” he said, expressing hope that one day “there will be a feast for the martyrs of Kandhamal,” and that the pope himself will come to India to preside over a sainthood ceremony. It’s a beguiling dream, in part because the agony is far from over. Just last week, there were unconfirmed reports that two more Dalit Christians were gunned down by paramilitary forces on a hilltop where they had gone in search of a cellphone signal, in an effort to phone their children who had moved away to look for work. Such killings are common, observers say, in a context in which police and paramilitaries are allied with militant Hindus and local elites. “They look for any excuse to kill us,” said the Rev. Ajaya Kumar Singh, a Catholic priest who heads the Odisha Forum for Social Action. As a result, canonizing Digal and the other martyrs of Kandhamal would not merely be an act of historical justice. It would also be a way of shining a spotlight on what continues to be a danger zone. Barwa said it would be a “great joy” if someone were to help defray the cost of a sainthood process, and he would be “delighted” to accept. In sum, the case for a halo for the martyrs of Kandhamal seems a slam-dunk. The question now is whether somebody — perhaps affluent Christians in the West, whose social standing generally insulates them from such risks — will help cover the tab. * * * * * read more on anti-Christian persecution in India at Crux
Posted by Mike at 4:40 PM