India: The Hindu woman who risked her life to save a group of nuns 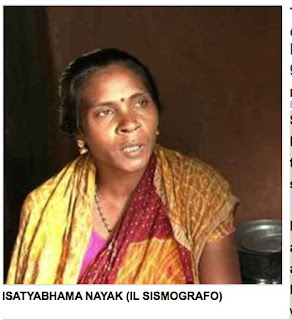 She put her life on the line to save Christians. Satyabhama Nayak is a Hindu woman who opened her doors to a group of nuns and hid them in the midst of the anti-Christian pogroms that raged across the Indian state of Orissa in August 2008. In the district of Kandhamal, in Orissa, faithful were rounded up, beaten and became the victims of punitive expeditions, which forced them to abandon their homes and properties amid a wave of violence triggered by Hindu extremist groups. Religious hatred turned into a full-on manhunt with tragic consequences: more than 400 villages were “cleansed” of all Christians; 5,600 homes and 296 churches were burnt, 100 people died (but the government only recognises 56 of these deaths), thousands were wounded, a number of women were raped, 56,000 people were displaced. One of the most despicable of crimes, was the rape of sister Meena Barwa by a number of men. She was then forced by her persecutors to walk through the streets naked as a sort of trophy symbolising the men’s victory. Seven years on, the Christian community complains that the insufficient administration of justice and political complicity have led to a significant number of guilty individuals going unpunished. According to the figures published by the local Church, the police has approved 1,541 out of the 3,232 criminal complaints filed by Christians. Of these, only 828 cases were actually taken to trial. In 169 cases, legal procedures ended with the full acquittal of 1,597 defendants because key witnesses were often subjected to threats and intimidation. And while in 86 cases the sentences handed down were very light, 90 other cases are still in the investigation phase but as time passes, the chances of gathering irrefutable proof are lessening. Since then, every 25 August, the symbolic date when the violence broke out, the Christian community in Orissa celebrates a special “Day of Remembrance”, organising conferences, public demonstrations, peace marches and prayer vigils in order to keep this dark chapter of Indian history fresh in everyone’s minds. According to John Barwa, Catholic archbishop of Cuttack-Bhubaneswar, “justice means obtaining compensation, rebuilding houses, the possibility to return to one’s origins. Christian citizens are asking to be treated like everyone else, according to the principles of equality.” It has to be said that alongside the negative experiences of Hindu extremists persecuting Christian communities, there are also situations where different communities and faiths peacefully co-exist in Orissa. In recent months, the Christian Forum of Sambalpur, another district of Orissa, sent a memorandum to the state governor, S.C. Jamir, expressing "profound gratitude to the administration of the district of Sambalpur for having enforced the law, ensuring peace and security to the Christian communities and other minorities in recent years”. The Forum recalls that Christians “are compassionate, kind, humble" and have always contributed to social harmony. On the anniversary of the massacres that will leave an indelible mark on Christians in Eastern India, the story of Satyabhama Nayak comes to the fore again in commemoration of that suffering and draw people’s attention back to the seed of goodness that lies within human beings, regardless of religious belief, ethnicity, language or nationality. “The nuns from the Balliguda convent rushed over to my house as the rioters milled around nearby. Seven nuns had fled walking through the countryside. Some were wounded and they were all terrified. I was speechless and I asked my grandson to find out what the upheaval was all about,” recalls Satyabhama in a moving testimony. “I was scared and prayed to God to keep me and the nuns safe because extremists showed no mercy towards those who helped Christians,” she continued. “We learnt that one nun was found in the home of a Hindu man and she had been raped. I tried to calm the nuns and we hid them in the sheep pen.” The woman concluded by saying: “One of my neighbours warned me: the rioters were after Christians who were hiding in Hindu homes. If you want to spare your life, get rid of those nuns. I said I did not want to. Whether Hindu or Christian, we are all human beings. The next day we snuck into the forest and stayed there. There were Christian men and boys with the nuns. After three fear-filled days, the police finally arrived. God’s Providence helped us and we saved ourselves.”
Posted by Mike at 11:58 AM