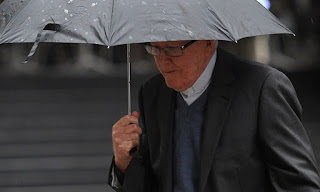 Bishop Geoffrey Robinson In a day of remarkable evidence before the royal commission into institutional responses to child sexual abuse, Bishop Geoffrey Robinson offered damning assessments of the most senior Catholic clerics on the planet. Pope John Paul II “handled the abuse poorly”. Cardinal George Pell was a “most ineffectual bishop” and “the majority of the priests wished he’d get transferred somewhere else.” Even Pope Francis is not providing “real leadership”. But his most chilling and telling statement about the Catholic church was the one he made about the church hierarchy’s response to revelations about child sexual abuse: “What we got was silence, so bishops were loyal to the silence.” Robinson’s statement is simple, but it speaks of the extent to which the church hierarchy exercises control – and enforces silence – through a combination of rigid orthodoxy, secretive practices, intimidation, and threat of exclusion or excommunication. Even many Catholics may not be aware of the how the church leadership manages the institution, as most of us in the pews interact only with our local parish priest. For nearly 25 years I have been engaged with what can be broadly termed “the progressive movement” in the Catholic church: theologians and activist groups agitating to modernise the institution and break open the undemocratic, celibate male stranglehold on power in the church. I have known many priests over the years who privately cheer the progressives on, but publicly stay silent. These priests walk a fine and dangerous line, fearful sometimes that one comment in a homily will cause a parishioner to report them to the bishop and invite a world of pain. I’ve known of priests and theologians who faced a fate similar to outspoken Toowoomba bishop Bill Morris: forced out after a “sham process instituted in Rome to get rid of (him) at any cost, and regardless of any particular charges.” It’s not just priests. At the risk of sounding like a conspiracy theorist, I have recently been subjected to similar tactics. In the past 12 months two organisations run by the Catholic church in Sydney invited me to take up formal positions – one as a patron, the other as a speaker at a fundraising dinner. In one case the role had been publicly announced. In both cases the organisations had to ring and apologetically explain that they were forced to withdraw the offer because “higher ups” had decided “some of my views” made me unsuitable. These Machiavellian machinations are effective: I’ve recently turned down two subsequent Catholic invitations simply to avoid embarrassment for the organisation when it is eventually forced to cancel. It might be simpler for all if the Sydney diocese just sent out a memo. But speaking out as a lay person on contraception, women’s ordination and same sex marriage is one thing: surely no truly honest and caring human being could stay silent about child sexual abuse? Surely no priest or bishop could value his job over the need to protect children? This is where clericalism in the Catholic church jars so horribly with an open and free society. When the Australian government becomes aware of the extent of child sexual abuse in institutions, it holds a royal commission with open hearings. When the leadership of the Catholic church becomes aware of the extent of child sexual abuse, it designs secretive processes to protect the institution and spins to its priests that there are worse sins than sexually abusing children, such as abortion or homicide. Perhaps the greatest sin is the one committed by the leadership of the Catholic church: a self-aggrandising pride that allows it to view itself as a God-given institution that is more important than keeping children safe and saving children’s lives. Robinson argues that the best way for the Catholic church to prevent sexual abuse of children is to fundamentally change its culture: break down clericalism, end the secrecy, break open leadership to women and married men, confront the harm that enforced celibacy does to human beings, and provide professional mentoring and support to priests. It’s hard to imagine that Robinson’s prognosis could come to pass. He is a retired bishop with a terminal illness – his commentary can be discounted by the hierarchy. Then again, perhaps not. A few Sundays ago Bishop Terry Brady visited our local parish and spoke honestly about child sexual abuse. He spoke with regret and despair about the church’s silence. He told the congregation to never forget that all of us who believe in Jesus Christ are the church. The church doesn’t belong to the bishops, he said, but to all of you in the pews and he encouraged us to speak up and speak out. He may as well have said we priests need your help to break the silence. People spontaneously applauded at the end of his sermon. If only Pell and Pope Francis in Rome could have heard them clapping. Kristina Keneally is a Guardian columnist. She is the 42nd Premier of New South Wales and holds a Masters’ degree in theology. In September she is chairing a session titled “Break the Silence” at the Women’s Ordination Worldwide International Conference in Philadelphia.
Posted by Mike at 11:39 AM