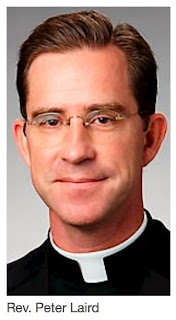 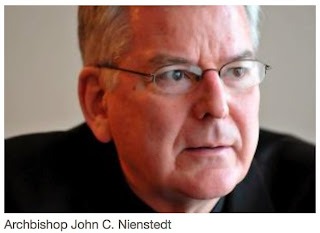 A former top deputy of the Twin Cities archdiocese said he suggested last fall that Archbishop John Nienstedt resign in the wake of allegations that leadership mishandled clergy sexual abuse cases. The Rev. Peter Laird, former vicar general and moderator of the curia, said in a May 12 deposition that resignation was "among options" he suggested to Nienstedt in late September or early October. Laird himself resigned Oct. 3. Ten days earlier, Minnesota Public Radio reported that the Archdiocese of St. Paul and Minneapolis possessed, but did not give to police, information regarding convicted St. Paul priest Curtis Wehmeyer's sexual behavior. The media report prompted Laird's resignation, and his suggestion that Nienstedt do the same, Laird said. Leaders in the archdiocese "have a responsibility to be accountable for decisions whenever they take place in an organization and -- and to signal trust and that the most important thing is, is that the archdiocese doesn't have anything to hide," Laird said. St. Paul attorney Jeffrey Anderson released the transcript and video recording of the deposition, taken as part of the case of Doe 1. Doe 1 is the pseudonym of a man who sued the archdiocese, the Diocese of Winona and former priest Thomas Adamson in May 2013. He claimed that Adamson sexually abused him in the 1970s and that the archdiocese moved him from parish to parish despite hearing of allegations of child abuse. Laird said Nienstedt didn't say anything in response to his suggestion the archbishop resign. Nienstedt has retained his position. Attorney Michael Finnegan, who works with Anderson, said Laird's suggestion was striking. "In all the years I've been doing this, I've never heard of any top official suggesting that his bishop resign," Finnegan said. Laird maintained at several points in the deposition that the archdiocese had greatly improved its response to child sexual abuse by priests. But the fall reports were too big to ignore, he said. "It had become clear and apparent to me that this was going to be -- how the archdiocese responded to this situation was going to be a defining moment for the archdiocese," Laird said. "And not because there had ever been an effort to do anything criminal ... in fact, I think that a lot of good work had been done over the last three years." The archdiocese declined to comment on the deposition because it is part of ongoing litigation. It posted the deposition transcript on its website. Laird also said he notified the archbishop as soon as he learned in 2012 that a local priest was accused of sexually abusing two boys. Laird believed the day was June 20, he testified. He learned later that day or June 21 that the priest was the Rev. Curtis Wehmeyer of Blessed Sacrament Church in St. Paul. He said the archdiocese reported the matter to police "within hours" of learning it was Wehmeyer. Nienstedt said in his deposition that he got the information on June 22 from Andrew Eisenzimmer, who was then the chancellor for civil affairs for the archdiocese. But Nienstedt signed a decree to the Vatican on June 20, 2012, that said the archdiocese received a complaint June 18 that Wehmeyer had abused a child. Nienstedt said in his deposition that Jennifer Haselberger, then chancellor for canonical affairs, drafted the letter and that the date was wrong. He did not notice the date at the time he signed it, he testified. Wehmeyer was sentenced in February 2013 to five years in prison for criminal sexual conduct and possession of child pornography. Haselberger resigned in protest in April 2013, saying that archdiocesan officials repeatedly blundered in their response to clergy sexual abuse cases and did not make required reports to police.
Posted by Mike at 8:09 PM