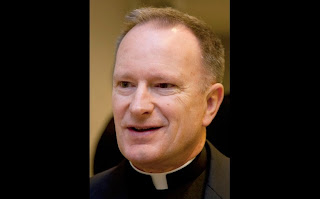 Oakland bishop Michael Barber National Catholic Reporter April 28, 2014 Just what does a teacher do at school? And just what can a teacher do at home? Catholic educators in dioceses across the country are facing those fundamental questions as they decide this spring whether to sign contracts pledging to work for the 2014-15 academic year. Seeking to define the role of Catholic education as more identifiably Catholic, several dioceses this year are specifying in their teachers' contracts more clearly -- sometimes with lists of dos and don'ts -- how their teachers are to act in their personal lives. Some are even redefining teachers not as educators but as ministers. Legal experts and union organizers say it's a mix that could have sharp implications on teachers' ability to bring civil suits when they believe their employers treat them inappropriately -- and could even prevent them from forming unions to bargain for better wages or conditions. One scholar who specializes in the intersection of law and religion says the changes are effectively an end-run around legislation protecting employees from discrimination in the workplace. "It's about churches trying to do everything they can to avoid the anti-discrimination laws, because they don't want to be held to gender equality, sexual orientation equality, racial equality or equal pay," said Leslie Griffin, the William S. Boyd Professor of Law at the University of Nevada, Las Vegas. "They want to do their best to get outside all of these laws," said Griffin. She was referring specifically to new teachers' contracts in the Cincinnati archdiocese and the Oakland, Calif., diocese. New contracts distributed to teachers by those dioceses in April call the educators ministers, with the Cincinnati contract dozens of times referring to teachers as "teacher-ministers." The shift in language follows a January 2012 U.S. Supreme Court ruling that established a "ministerial exception" for religious employers from federal anti-discrimination and workplace labor laws. The court ruled those laws do not necessarily apply to people whom religious groups deem ministers. "When dioceses start to call their employees ministers, I look at that as a way for a diocese to tell an employee, 'Well, you're a minister, you can't unionize,' " said Rita Schwartz, president of the National Association of Catholic School Teachers. The Philadelphia-based teachers' union has about 20 local and regional affiliate unions in dioceses across the country. "If that's what they're aiming to do, I have serious issue with that," she said. Ministry and ministerial rules Those speaking for the dioceses, however, see the issue differently. Mike Brown, director of communications and community outreach for the Oakland diocese, said Bishop Michael Barber simply "considers teachers teaching in Catholic schools as having a ministry." Barber, who was appointed bishop in May 2013, finds that ministry "more than casually important" as he is a former teacher himself, Brown said. Regarding whether there is a "side benefit" when it comes to anti-discrimination laws, Brown said, "I know that obviously we have an employment lawyer who looks at whatever contracts we draw up so that it's clear and concise. Whether he added something or not, I don't know." Steve Pehanich, senior director for advocacy and education at the California Catholic Conference, likewise said that he considers all teachers as ministers. "Some might say the most important aspect of a Catholic school is to pass on the faith," he said. "Everybody who works at a Catholic school is in that sense a minister in one way or another because they represent the school," he said. The new contracts in the Oakland diocese make two small additions to contracts from previous years, adding sections on the philosophy of Catholic schools and on the duties of teachers. The philosophy section states that the mission of the school "is to develop and promote teaching the Catholic faith within the philosophy of Catholic education." The duties section states that employees are, in their personal and professional lives, "expected to model and promote behavior in conformity with the teaching of the Roman Catholic faith in matters of faith and morals." Employees, it states, "shall perform [their] duties as a minister and steward of principles characteristic of an educator in a Roman Catholic School, including without limitation, teaching the doctrines, principles, beliefs of Roman Catholic Church, and conducting himself or herself in accord with these Catholic standards." In a letter sent with the new contracts to school principals and presidents in the diocese, Barber said the changes came about after discussions among California's bishops "about the importance of Catholic identity and especially how it is expressed in our Catholic schools." Pehanich said that California's bishops have not decided together to insert the Oakland diocese's new language into their teachers' contracts but are each considering the matter. "The bishops talk about education all the time," Pehanich said. "There's no formal statement or something that they've done. But every bishop has schools and every bishop is concerned with it." The new contracts in the Cincinnati archdiocese are much more extensive, taking what was a two-page document in previous years to six pages. The largest additions are eight statements that teachers -- or "teacher-ministers" -- must affirm regarding their work; a list of actions that could lead to their firing; and specifications for how religion teachers can obtain required certification from the archdiocese that they know the Catholic catechism. Another diocese that has adopted new language for their teachers' contracts is Honolulu, which encompasses the entire state of Hawaii. Like Cincinnati's new version, that contract specifies what teachers can and cannot do — specifically prohibiting "unmarried cohabitation," "homosexual activity" and "same sex unions."

Schwartz of the National Association of Catholic School Teachers called the Cincinnati document "overkill." While she said she understood the need for a morality clause in Catholic teachers' contracts -- "I don't think you can be a Catholic school teacher without one," she said -- the organizer called the Cincinnati contract "six pages of 'thou shalt not.' " "There's no reason for that," she said. "There's got to be a happy medium here." Jim Rigg, superintendent of Catholic schools and director of the department of educational services for the Cincinnati archdiocese, said in a column for The Cincinnati Enquirer in early April that the new contracts were "not an excuse for some type of witch hunt, but merely a clearer verbalization of what it means to be a Catholic schoolteacher." The head of the National Catholic Education Association would not respond to specific inquiries for this story, saying his group did not have legal expertise on contract matters, but he did give a short statement via email. "Teachers in Catholic schools are held to high standards and each diocese determines their own employment policies," said Lasallian Br. Robert Bimonte, president of the association, which represents some 150,000 educators serving 6 million students across the country. "In upholding those standards, each local diocese must ensure that mutual respect, compassion and pastoral sensitivity prevail," Bimonte said. Griffin, the lawyer at the University of Nevada, said it is likely that diocesan claims that their teachers are ministers will have to be decided by courts across the country "one by one." That's because in the decision for the Supreme Court in the January 2012 case, Hosanna-Tabor Evangelical Lutheran Church and School v. Equal Employment Opportunity Commission, Chief Justice John Roberts wrote that a "ministerial exception" exists, but said the justices "express no view on whether the exception bars other types of suits." Griffin, who has written briefs opposing the ministerial exception, said different lower courts have issued different rulings about whether teachers can be considered ministers. In one instance, a non-Catholic technology teacher in Pennsylvania who was called a minister by a Catholic school was deemed not a minister by the federal district court. In another case, however, judges ruled that a Jewish professor of religious history at a Christian seminary was a minister. "Eventually, a court might start saying it's bad as a matter of public policy to let all the religious employers write contracts that free them of any liability," Griffin said. "I think that eventually we'll start to come around and the anti-discrimination laws will dominate again," she said. "But right now these contracts are a huge effort by these churches to avoid the anti-discrimination laws." No matter what happens with court cases on the matter, Schwartz said she and her group will be working to unionize teachers. Most Catholic teachers, she said, "have no job security, have no due process. They just work at the pleasure of the employer." "They need to stop doing that," she said. "They need to organize themselves into an association, they need to petition for recognize and collective bargaining. That's the only way that they're going to have a say over the conditions under which they work. And the sooner they do it, the better." Griffin suggested that teachers consider consulting with lawyers if they have to sign contracts defining them as ministers. Particularly, she said, those teachers might consider trying to insert language into their contracts that specify that while they are ministers, they still claim their rights to sue for workplace discrimination. Ultimately, said Griffin, "Catholics have to stand up to this." "The laws won't change unless people start seeing it more from the employee perspective," she said.
Posted by Mike at 10:01 AM