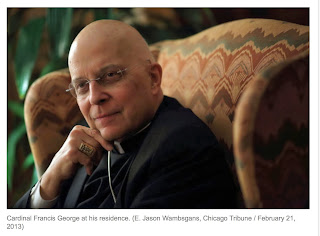 "The files speak for themselves. What the documents demonstrate to us is that all the cardinals, including George, were complicit." -- Jeffrey Anderson, attorney for victims of clergy sex abuse. Those harsh words are backed up by the release of 6,000 pages detailing the actions and inactions of leaders in the Archdiocese of Chicago when confronted with allegations of sexual misconduct by priests. On Tuesday, in accordance with a court settlement, the archdiocese released its case files on 30 of 65 priests with substantiated allegations of sexual misconduct. The accusations against those priests surfaced under the leadership of Cardinals John Cody, Joseph Bernardin and Francis George. The priests’ names have been public for years. The depravity and scope of the abuse, in Chicago and elsewhere, is no longer in question. Yet the files are still shocking, individually and in their totality. In black and white — accessible with the click of a computer mouse — they recount tale after tale of faith betrayed, first by a cleric and then by the church. Catholics who came forward to report unspeakable abuse at the hands of their parish priests were met with disbelief and denial from church leaders. That resistance continued even as allegations mounted. Priests accused of molesting children were protected from prosecution, shuttled from parish to parish by higher-ups who sought to cure or redeem them — and to shield the church from scandal. Victims were disregarded, shamed and even investigated. “We had relatives that didn’t even believe us,” said one victim, now 56. Their only recourse was to take their religious fathers to court. Over the past 25 years, the archdiocese has paid more than $100 million to victims. But the true damage to the church is immeasurable: Thousands of innocent priests harmed by association. Countless Catholics disillusioned and alienated. The files released Tuesday point to failings at the top: The secretive Cody, who counseled one accused priest that “no good can come of trying to prove or disprove the allegations.” The pastoral Bernardin, who removed dozens of accused priests from the ministry in 1991 — but only after granting many of them second, third and even fourth chances. The cerebral George, whose handling of the relative handful of cases he inherited showed a puzzling failure to absorb the lessons of his predecessors’ mistakes. George admits he mishandled three cases. He lobbied to have one convicted child molester released early from prison and failed to act quickly to remove another, since convicted, from ministry. When another was accused of molesting two sisters nearly three decades earlier, George initially disregarded a review board’s recommendation to remove the priest from ministry and instead allowed him to be monitored by a close friend. At least a dozen more allegations have since been levied against the same priest, who denies all wrongdoing. One serial abuser who eventually went to prison on child pornography charges had been reassigned repeatedly by Cody and Bernardin. Another was promoted to pastor despite several accusations of sexual abuse, then was forced to resign. A priest nicknamed “Happy Hands” by students was sent to minister to the elderly in nursing homes. It’s disappointing, distressing, disgraceful. But the failure to own up to it is a worse reflection on the church. “I feel that this whole matter should be forgotten by you as it has been forgotten by me,” Cody wrote to one accused priest in 1970. The victims did not forget. The archdiocese says 95 percent of the allegations covered in the documents released Tuesday occurred before 1988, and none occurred after 1996. The healing that might have taken place in all those years was impeded by the church’s denials. Perhaps now that healing can begin in earnest.
Posted by Mike at 4:41 PM