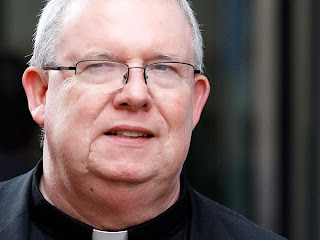 PHILADELPHIA District Attorney Seth Williams blasted the Archdiocese of Philadelphia on Tuesday for helping Msgr. William J. Lynn post bail after an appeals court overturned his conviction for crimes related to sex abuse in the church. Lynn needed to post 10 percent of the $250,000 bail set by Common Pleas Court Judge M. Teresa Sarmina. Williams said the archdiocese posted the $25,000. The archdiocese, through a spokesman, would only confirm that it assisted with Lynn's bail. The state Department of Corrections website showed that Lynn remained in custody. "It is disgusting that they would pay to free this man," Williams said at a hastily called news conference, held shortly after 7 p.m. outside the Union League. Williams said he had just found out that the archdiocese had put up the money to free Lynn from prison. As a former top archdiocesan administrator, Lynn protected pedophiles and the archdiocese is again conducting "business as usual" by "protecting their own," Williams said. As a Catholic and former altar boy, the prosecutor said, the archdiocese's action had a "profound impact on me." It has closed churches and schools, Williams said, but it has money for Lynn. "I am shocked and overwhelmed," he said. Ken Gavin, director of communications for the archdiocese, confirmed that the archdiocese "assisted with the posting of bail for Msgr. Lynn." Read full article at Philadelphia Inquirer
Posted by Mike at 6:37 AM