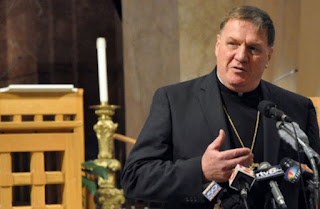 The past month has been a whirlwind for Joseph Tobin: on Oct. 9 Pope Francis surprised the world by including him on the list of the 17 new cardinals he’ll create later in the month. And on Monday, the Vatican announced his new destination: Newark, New Jersey. “One of my favorite descriptions of the experience of faith is ‘a willingness to be surprised by God’,” Tobin said in a statement on Monday. “By that standard, the last weeks have been exceptionally ‘faith filled’.” As of Nov. 19, when the pontiff formally elevates Tobin, 64, to the Church’s most exclusive club in a ceremony held in Rome known as a consistory, the US prelate will become Newark’s first cardinal, in the diocese’s 163-year history. His fluent Spanish will come useful for leading the city’s 1.2 million Catholics, an estimated half of whom are Hispanic. Tobin, currently in Indianapolis, will replace Archbishop John J. Myers, who presented his resignation this July, after turning 75. By canon law, it’s mandatory for every bishop to submit their resignation when reaching this age, and then it’s up to the pope to accept it and to appoint a replacement, which can take months or years, depending each case. Self-defined as a “culture warrior,” Myers led the diocese for 15 years. The contrast may be striking, as Myers was generally seen as something of a throw-back in terms of his concepts of clerical authority and lifestyle, while Tobin is regarded as more in the mode of Pope Francis in terms of his emphasis on simplicity and informality. In 2013, Francis had appointed Archbishop Bernard Hebda as coadjutor in Newark, which is the reason why he was originally seen as Myers’ probable successor, but earlier in the year he was transferred to St. Paul and Minneapolis amid a sexual abuse scandal in the Twin Cities. Hebda had arrived in New Jersey while the archdiocese was shaken by a scandal of its own, when it was revealed that a priest who had a lifetime ban on ministering with youth due to sexual abuse allegations, was in fact, attending youth retreats and hearing confessions from minors. A former superior of the world Redemptorist religious order, Tobin had been named archbishop of Indianapolis in October 2012. This appointment followed a two-year job as the second in command of the Vatican’s Congregation for Institutes of Consecrated Life and Societies of Apostolic life, also known as the “Congregation for Religious.” He was transferred to the Vatican while Rome was conducting two separate investigations of American nuns, probes Tobin publicly questioned. During this period, he was also responsible for the visit and reform of the male communities in Ireland during the sex abuse crisis in the country, and is currently overseeing the ongoing reforms of the Soladitium Christianae Vitae after scandals involving their founder, Luis Fernando Figari, were made public last year. The prelate has known Francis since the 2005 Synod of Bishop on the Eucharist, where the two worked closely for almost a month. During the meeting, as is customary, much of the work was done in small working groups divided by language. Tobin and then Cardinal Jorge Mario Bergoglio were assigned to one in Spanish. The cardinal-elect made news last December when he defied Indiana’s Governor Mike Pence - currently Donald Trump’s vice-president nominee - by allowing a family of Syrian refugees to settle in Indiana, despite a ban from the governor. Pence had called for the ban citing fears of terrorism and insufficient vetting, but a federal appeals court found it to be discriminatory, upholding a preliminary injunction against enforcement. Myers had a similar clash with Governor James Christie over Syrian refugees, saying that the archdiocesan policy was to welcome those who arrive from Syria, arguing that people are “being murdered for their faith,” and that it was the Church’s prerogative not to exclude anyone. Though Francis was expected to include at least one American in the new batch of cardinals, his decision to include Tobin came out of left field, surprising most observers, including the prelate himself, who found out through Twitter at 5:30 AM, little past noon Rome time, when the pope made the announcement. Bishop Kevin Farrell, recently transferred to the Vatican to head a new mega-office dedicated to the family, laity and life, was a strong bet among long-time Church watchers. Chicago’s Archbishop Blase Cupich, the third new American cardinal, had also been expected. In a press conference held soon after Francis’ made the surprise announcement during his weekly Sunday Angelus prayer, reading the 17 names from a piece of paper he took out of his pocket, Tobin defined his initial reaction to the news as “shock, mixed with a little embarrassment.” A native of Detroit, Tobin is the oldest of 13 children. He will be installed in Newark on January 6, 2017.
Posted by Mike at 4:52 AM