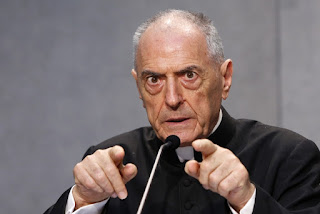 Archbishop Pio Vito Pinto, Dean of the Roman Rota, told a conference in Spain that Cardinal Burke and the three cardinals who submitted the dubia to Pope Francis "could lose their Cardinalate" for causing "grave scandal" by making the dubia public. The Dean of the Roman Rota went on to accuse Cardinals Raymond Burke, Carlo Caffarra, Walter Brandmüller and Joachim Meisner of questioning the Holy Spirit. Archbishop Pio Vito Pinto made his astounding accusations during a conference to religious in Spain. Archbishop Pio Vito's indictment against the four cardinals, and other people who question Pope Francis and Amoris Laetitia, was that they not only questioned one synod of bishops on marriage and the family, but two synods, about which, "The action of the Holy Spirit can not be doubted.". The Dean of the Roman Rota went on to clarify that the Pope did not have to strip the four senior cardinals of their "cardinalate", but that he could do it. He went on to confirm what many commentators have suspected that Pope Francis' interview with Avvenire, the newspaper of the Italian bishops, was the Holy Father's indirect response to the cardinals' dubia: During the conference, Pius Vito made clear to those present that the Pope did not respond directly to these four cardinals, "but indirectly told them that they only see white or black, when there are shades of color in the Church." The Dean of the Roman Rota, the highest canonical court responsible for marriage in the Catholic Church, went on to support Pope Francis' innovation of allowing divorced and "remarried" to receive Holy Communion. In response to a question asking if it was better to grant divorced and civily remarried couples nullity of marriage so they can marry in the Church before they receive Holy Communion Archbishop Pio Vinto expressed preference for Pope Francis's "reform": Pope Francis' reform of the matrimonial process wants to reach more people. The percentage of people who ask for marriage annulment is very small. The Pope has said that communion is not only for good Catholics. Francisco says: how to reach the most excluded people? Under the Pope's reform many people may ask for nullity, but others will not.
Posted by Mike at 2:56 PM