In historic first, a cardinal expected to be named head of Newark Archdiocese 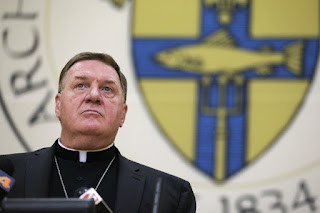 In a historic moment for the Archdiocese of Newark, Archbishop John J. Myers on Monday is expected to announce his successor, Cardinal-designate Joseph W. Tobin, currently the archbishop of Indianapolis, NJ Advance Media has learned. Tobin, a moderate leader who has supported a greater role for women in the church, has also expressed the need for more dialogue over gay parishioners and has sparred with Indiana Gov. Mike Pence over the resettlement of Syrian refugees. Tobin has served as archbishop of Indianapolis since October 2012. Pope Francis named him a cardinal last month. The designation takes effect. Nov. 18. The appointment would make him the first cardinal in the 163-year history of the archdiocese, which serves about 1.2 million Roman Catholics in Essex, Union, Hudson and Bergen counties. He also would be the first member of a religious order to preside in Newark. Tobin was ordained a priest in the Redemporist order in 1978. On Tuesday, Myers turns 75, the mandatory retirement age for Catholic bishops. Jim Goodness, a spokesman for the archdiocese, declined to comment on the nature of Myers' press conference Monday. But three people with knowledge of the diocese's plans said they expect Myers to announce that Tobin will replace him. The sources spoke on condition of anonymity because they were not authorized to discuss the announcement publicly. Myers, Newark's archbishop since 2001, reached the mandatory retirement age of 75 in July. It was not immediately clear if Tobin would be present for the press conference, scheduled for 10:30 a.m. at the Cathedral Basilica of the Sacred Heart in Newark. U.S. cardinals typically serve in the largest and most politically important cities, among them New York, Los Angeles and Chicago. Cardinal Theodore McCarrick, a former archbishop of Newark, was not elevated to cardinal until his transfer to Washington D.C. Tobin, a 64-year-old Detroit native, is the oldest of 13 children, according to his biography on the Archdiocese of Indianapolis' website. He served at parishes in Detroit and Chicago before taking on a series of assignments in Rome. He is believed to be close with Pope Francis, with whom he has a personal relationship and who appointed Tobin to several prestigious assignments at the Vatican. Tobin appears to also share Francis' belief in simple living, a turn away from the notion that bishops and cardinals are "princes of the church." In an interview with The Criterion, a publication of the Archdiocese of Indianapolis, after he was named a cardinal, Tobin recounted a conversation with his mother. "It's funny," he said. "My mom can get a little emotional at times. She said, 'I can't believe that a child of mine is a prince of the Church.' I said, 'Mother, you don't believe I'm a prince of the Church. I don't believe I'm a prince of the Church. And Pope Francis doesn't believe I'm a prince of the Church. So let's never use that word again.'" Tobin made headlines late last year when he defied a ban by Pence, Indiana's governor and Republican presidential nominee Donald Trump's running mate, on the entry of Syrian refugees in that state. More than 150 Syrian refugees have since been taken up residence in Indiana with the help of the archdiocese, according to the Indianapolis Star. Pence ultimately declined to enforce the ban.
Posted by Mike at 5:42 PM