'Seminarians going on a dating site, there's something wrong there' - Archbishop Martin 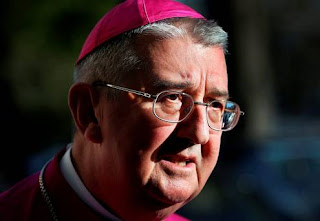 Archbishop Diarmuid Martin said he wishes to take men training to become priests in Ireland away from the closed environment of a seminary. The cleric was speaking to RTÉ Radio One’s This Week programme on Sunday afternoon. He told the show he made his decision to remove three seminarians from St Patrick’s College at Maynooth in June, following various reports and blogs. He explained: “I have an obligation, if I feel there is an atmosphere that is unsettling for my students I have to take action.” He said that despite the decision of other bishops not to remove their seminarians from the college, he did not believe he was overreacting. “Seminarians going on a dating site, there’s something wrong there,” he explained. He added: “I have to live with my conscience and I have no difficulty in doing that.” He also said the reaction by the other bishops to his comments last week on the issue may have been “a misunderstanding”. According to the archbishop, other bishops are free to explore alternatives themselves, but that for him and his Dublin diocese “there’s a better way” than the seminary system currently operating at Maynooth. “I have no intention of telling other bishops what to do,” he added. “Maybe their seminarians are telling them they’re quite happy in Maynooth.” He said he told his three seminarians about the situation at Maynooth and “listened to their response and they’re happy to go.” He explained: “Until I have clarity about the climate in Maynooth I prefer to send them to Rome.” He also told the show: “Many of these cases that are coming forward were dealt with by the college council rather than independently.” Expressing surprise that a meeting of the trustees of the college had been called since the scandal arose last week, he said: “It’s a matter that has to be dealt with effectively and quickly. It’s not going to be easy.” Mr Martin was also critical of the structures at the Maynooth seminary, saying: “One of the things I have been constantly trying to do in Maynooth is upgrade the governance structures. “We have to have a modern governance structure.” “My real problem isn’t actually with the procedures, it’s with the strange atmosphere of innuendo going on.” “Am I happy with all the procedures in Maynooth? No. Am I happy with some of the procedures? Yes.” He added that he is not isolated and that others have supported his move.
Posted by Mike at 11:33 AM