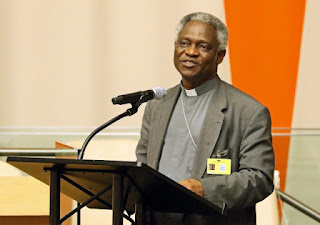 Pope Francis on Wednesday confirmed that the quest for peace and justice is a hallmark of his papacy, and that his point man for it is his top African aide, by creating a new Vatican super-department and by appointing Cardinal Peter Turkson of Ghana as its first-ever prefect. In a new motu proprio, meaning a legal document issued under the pope’s personal authority, Francis created a new dicastery, the overall term for a Vatican department, for Promoting Integral Human Development. The new dicastery convenes four preexisting Vatican departments: the Pontifical Council for Justice and Peace, previously headed by Turkson; Cor Unum, the Vatican’s agency for coordinating the work of Catholic charities; the Pontifical Council for Migrants and Refugees, another subject close to the pontiff’s heart; and the Pontifical Council for the Pastoral Assistance to Health Care Workers, which among other things oversees the work of some 6,000 Catholic hospitals around the world and 18,000 clinics. The consolidation of those departments into a single new entity is part of a broader reform of the Roman Curia desired by Pope Francis, and worked out in conversation with his nine-member council of cardinal advisers from around the world. The American member of that council is Cardinal Sean P. O’Malley of Boston. Since the beginning of his papacy, Francis has insisted that issues of justice for the poor, conflict resolution and combating what he describes as a “throwaway culture” must be absolute priorities for the Catholic Church. By creating a powerful new Vatican department, and by installing as its first leader an African cardinal widely understood to enjoy the pope’s favor, he has created an important new platform to pursue those issues. The creation of the new department for human development comes roughly two weeks after Pope Francis created another new department, once again consolidating several previously existing offices, dedicated to laity, family, and life. The creation of both departments was recommended to the pontiff by his council of cardinal advisors. Although Pope Francis is legendarily adverse to bureaucracy, in the culture of the Vatican the creation of two powerful new departments bringing several important agencies under their control is widely understood as a statement about the pontiff’s priorities. “In all her being and actions, the Church is called to promote the integral development of the human person in the light of the Gospel,” says the document released on Wednesday, signed by Francis on August 17. The development, the motu proprio says, takes place by attending the inestimable goods of justice, peace, and the care of creation. The new dicastery will begin its function on January 1, 2017, and as the combination of offices signals, will be competent particularly in issues regarding migrants, those in need, the sick, the excluded and marginalized, the imprisoned and the unemployed, as well as victims of armed conflict, natural disasters, and all forms of slavery and torture.
Posted by Mike at 6:12 AM