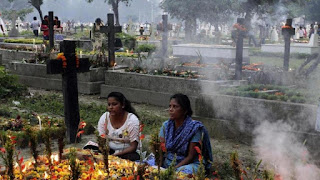 All the conditions are there and the President of the Episcopal Conference, Cardinal Oswald Gracias, expressed the hope that the 101 Christians killed “in odium fidei” in the wave of Hindu extremist violence that engulfed the Indian state of Orissa in 2008 will be recognised as martyrs. As the date of Mother Teresa of Calcutta’s canonization in the Vatican approaches, on 4 September and as Narendra Modi’s government announces that a high-profile delegation (not including him) is to be sent for the occasion, another matter holds court in the Indian Church. It involves the delicate relations with the nationalist government currently leading the world’s biggest democracy. It is a painful event which speaks of suffering, violence, rape, abuse, destruction and displacement: the gratuitous violence unleashed against defenceless civilians, which led to the deaths of 101 victims, the scientifically orchestrated destruction of 8500 homes and 395 churches and the displacement of 56,000 Christians, permanently exiled from their villages, they lost homes, property and every means of sustenance. Eight years on from this event which essentially amounted to ethnic cleansing, leaving a permanent scar in the heart of the nation’s Catholic community (it was the most ferocious incident of mass violence against Christians), the Church of central-eastern India has celebrated its “Day of martyrs” every year for the past 30 years. And it expects the entire nation, starting with the national Bishops’ Conference to acknowledge this cause, thus becoming sponsors of a real canonization process. The Bishop of Cuttack-Bhubaneswar, John Barwa, is very active on this front. He is President of Orissa’s regional Bishops’ Conference, which chose to celebrate the martyrs the day after that which commemorates the martyrdom of St. John the Baptist. This decision was “taken in order to honour and respect the sacrifice of those who lost their lives in the anti-Christian massacres of 2008 in the Kandhamal district,” Barwa explained to Vatican news agency Fides. He recalled having discussed this at the plenary assembly of Indian bishops which took place in Bangalore last spring. Meanwhile, the local Church has put a special team of priests and researchers in charge of documenting the incidents that caused the death of 101 Christians in Orissa, in preparation for the diocesan phase of the process for the declaration of martyrdom. But faith is not the only issue here, there are also human and legal repercussions to consider: the community continues to ask for full justice and adequate compensation for survivors. In the legal battle launched, Christians recently obtained a favourable verdict: India’s Supreme Court upheld an appeal made by former archbishop Raphael Cheenath, who died just a few days ago, considering the compensation handed out so far to be “inadequate” and ordering Orissa’s government to provide additional compensation for Christian families. The court also decided that 315 cases of violence are to be re-examined. All of these cases had been reported to the police, but it failed to carry out adequate investigations into the claims. As a result of this first step, even eight years on, the state government is still bound by the duty of guaranteeing that the authors of those crimes do not go unpunished. It also ensures that the violence of Kandhamal is not forgotten. This is why Delhi’s weekly newspaper, Indian currents, directed by Capuchin friar Suresh Mathew, backs the need for a memorial day by dedicating a special issue focusing exclusively on the Orissa martyrs, speaking of a “travesty of justice”. On the one hand, the newspaper recalls that almost a third of the 827 complaints filed by Christians were shelved because the police were unable to track down those responsible. Of 362 lawsuits launched, only 78 were heard in court. Secondly, most cases brought before judges were lost because eye-witnesses were threatened and the government “failed in its duty to protect witnesses to the most terrible of crimes”. In eight years, the government of Orissa did nothing to ensure the displaced could return to their homes, allowing the illegal and forced occupation of property owned by other people, actions it is evidently unwilling to question.
Posted by Mike at 11:07 AM