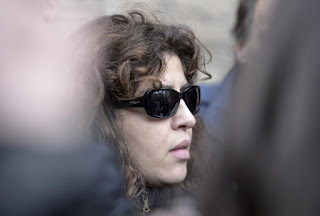 Francesca Chaouqui, the PR consultant at the centre of the Vatican's controversial leaks trial, threatened to "destroy" a Spanish priest she worked with, a Holy See court heard on Tuesday. "I will destroy you in the press and you know I can do it," Choauqui allegedly wrote in a WhatsAPP message to Spanish monsignor Lucio Angel Vallejo Balda that was cited by the prosecution in the case against two journalists and three Vatican employees. Vallejo Balda has admitted leaking classified documents to the two journalists, who have written books on the mismanagement of Vatican finances. But he says he only did so under pressure from Chaouqui, with whom he claims to have had a "compromising" relationship. Chaouqui, a former PR consultant to the Vatican who is married and six months pregnant, denies any sexual contact between her former colleague in an economic reform panel set up by Pope Francis. Vallejo Balda reiterated his claim to have been effectively blackmailed by a woman he believed to have links to Italian secret services and other contacts in a "dangerous world". "She boasted about having lots of details about my private life, my assets and my problems with the tax authorities," he said, claiming he had subsequently been encouraged by journalist Gianluigi Nuzzi to "make peace" with his colleague. "I felt they knew things about me," he added. Lucio Angel Vallejo BaldaChaouqui took particular exception to a suggestion in the Spanish cleric's testimony on Monday that she had claimed to have contacts in the mafia. Arriving at court for Tuesday's hearing, she showed a university legal thesis which she had dedicated to the slain anti-mafia judges Giovanni Falcone and Paolo Borsellino. "Accusing me of being connected to the mafia, as someone from (mafia-infested southern region) Calabria -- it is the worst attack that could be made on me," she told reporters. At the end of Tuesday's session, Chaouqui jumped up suddenly and rushed out of the room holding her hand over her mouth. Doctors and police were called but she appeared again shortly afterwards, the malaise apparently having passed. Her lawyer said Chaouqui may need to go into hospital for a procedure related to her pregnancy. The presiding judge said that subject to the appropriate certification that could lead to a further delay in the trial, which is due to resume on Friday. Chaouqui is accused of conspiring with Vallejo Balda and his assistant Nicola Maio to leak data and documents they had access to as members of a commission appointed by Pope Francis to spearhead a financial clean-up shortly after his election in 2013. The two journalists on trial, Nuzzi and Emiliano Fittipaldi, have published books based on the documents. All five accused have been prosecuted under draconian anti-leaks legislation, which could see them receive prison terms of between four and eight years. The law was rushed onto the Vatican statue book in 2013 as a result of the fallout from the first Vatileaks scandal, which centred on secrets divulged by the butler of now-retired Pope Benedict XVI. The Vatican has been criticised by press freedom groups for pursuing the prosecution of the two journalists, who say they were only doing their jobs.
Posted by Mike at 11:15 PM