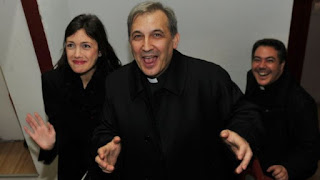 A Spanish priest has admitted to leaking classified Vatican documents to journalists, saying he had felt intimidated. Monsignor Angel Lucio Vallejo Balda has said he was manipulated by a woman co-defendant with whom he was romantically entangled. He was questioned as the so-called Vatileaks II trial resumed. It centres on two books that depict a Vatican plagued by graft and where Pope Francis faces resistance to his agenda. The books came out last year and were based on the leaked information. The five people on trial face jail terms of up to eight years. Mr Vallejo Balda, 54, was questioned for three hours and most of his testimony revolved around his relationship with Francesca Chaouqui, 35, a married public relations consultant. They were members of a now-defunct commission appointed by Pope Francis to tackle the Vatican's financial holdings and propose reforms to improve cash flow to the poor. "Yes, I passed documents," Mr Vallejo Balda told the court in Spanish. He also admitted to giving one of the authors some 87 passwords to access electronic documents and email accounts in the Vatican. 'Compromised' The priest said his actions were the result of a combination of sexual tension and blackmail by Ms Chaouqui, who claimed she was a spy with Italy's secret services. Saying he felt "compromised" as a priest, Mr Vallejo Balda recounted how she once entered his room in a Florence hotel. Ms Chaouqui is also accused of leaking confidential Vatican documents The priest, at one point, described the feeling of being "in a situation with no way out". In the testimony, he also said he received threatening messages from Ms Chaouqui and her husband, especially after the commission's work was over. Ms Chaouqui, who is in late pregnancy, attended the hearing and is expected to give evidence next week. She denies accusations of conspiring with Mr Vallejo Balda and his assistant Nicola Maio to leak information they had access to as members of the commission. The two journalists on trial, Gianluigi Nuzzi and Emiliano Fittipaldi, wrote the books Avarice and Merchants in the Temple. They are accused of putting pressure on the priest and Ms Chaouqui to get the documents, allegation both journalists deny. The five are on trial under a legislation criminalising the leaking of documents, introduced in 2013 after a scandal known as the first Vatileaks.
Posted by Mike at 8:25 PM