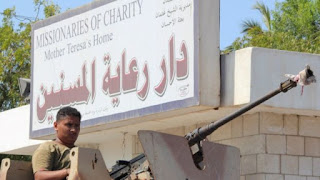 Pope Francis has condemned the killing of 16 people, including four Catholic nuns, at an old people's home in Yemen. He called Friday's gun attack in Aden an "act of senseless and diabolical violence". Reports said the attackers pretended they were visiting their mothers to gain access to the home. No group has claimed responsibility for the attack, though Yemeni officials have blamed so-called Islamic State. In a statement, the Vatican said two of the nuns killed were Rwandan, one was Indian and one was from Kenya. 'Pointless slaughter' They were working as nurses at the home and had been serving breakfast to its 80 residents when the attack occurred. All the victims were shot in the head and had been handcuffed, the Associated Press reported, citing the brother of a victim. The nuns were from the Missionaries of Charity congregation, which runs the home and was founded in Calcutta by Mother Teresa. Map Pope Francis "prays that this pointless slaughter will awaken consciences, lead to a change of heart, and inspire all parties to lay down their arms and take up the path of dialogue", Vatican Secretary of State Pietro Parolin said. "He sends the assurance of his prayers for the dead and his spiritual closeness to their families and to all affected from this act of senseless and diabolical violence." The care home looks after some 80 elderly people Breakfast was being served when the attack occurred Missionaries of Charity spokeswoman Sunita Kumar said members were "absolutely stunned" by the killings. The nun in charge managed to hide and escaped unharmed. Yemen is engulfed in a brutal civil war between Iran-backed Zaidi Shia Houthi rebels in the north and the Saudi-Arabia backed government in the south. Islamic State and Al-Qaeda in the Arabian Peninsula (AQAP) have both taken advantage of the war to gain ground in the country. More than 6,000 people have been killed and 2.4 million people displaced in Yemen's war, the UN says. Forces loyal to the government and southern militias regained control of Aden in July, aided by Saudi-led coalition air strikes and troops.
Posted by Mike at 4:18 PM