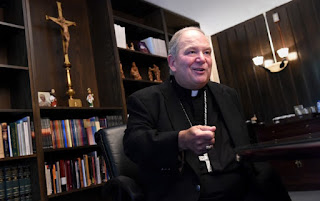 The interim leader of theArchdiocese of St. Paul and Minneapolis said Friday he expects its legal difficulties will be among the most urgent problems he’ll need to address. Transparency will be an important part of rebuilding trust among parishoners, Archbishop Bernard Hebda also said in an interview with The Associated Press. Under Hebda’s predecessor, Archbishop John Nienstedt, the archdiocese was shaken by a clergy sex abuse scandal that resulted in criminal charges of child endangerment against it, as well as a bankruptcy filing amid a growing number of lawsuits. Hebda said he hasn’t had time since he became temporary administrator in mid-June to formulate a rebuilding plan, noting that he got only a day and a half of notice that he’d be filling in before the Vatican’s announcement that Nienstedt was leaving. “It’s been a bit of a whirlwind so far and I’m still trying to assess the situation. … There’s still a lot to learn from the situation for sure,” said the 55-year-old, who is splitting his time between Minnesota and New Jersey, where he’s been preparing for nearly two years to become archbishop of Newark next year. Hebda said he’ll collaborate with a variety of people, Catholic or not, “who can help the archdiocese in its work of rebuilding the church. “I certainly hear it from so many people that it’s going to be important for us to transparent. That certainly is the mind of the church as well,” Hebda said, adding he’ll have to balance that against “respecting the rights of individuals” whom he did not name. Hebda was noncommittal about releasing results of an outside investigation that Nienstedt commissioned into allegations — which Nienstedt denies — that he was involved in inappropriate conduct with seminarians and priests. But he did say he is reading through the archdiocese’s own “very extensive investigation” that includes more than the outside law firm’s report. “Certainly as I speak with people — whether it be our priests, or our staff, or other committed laity in the archdiocese, as I read the mail that’s been coming in — I know that there’s an expectation for an accounting,” he said. “I think it would be difficult for us to move forward without there being some kind of accounting.” Hebda declined to give Nienstedt’s whereabouts or say what his future might hold, other than he’s on vacation this month and “considering what might be his future.” Hebda said he doesn’t know how long he will stay in the Twin Cities, as he’s slated to take over in Newark at the end of July 2016. Hebda said he knows from having worked at the Vatican for 13 years that not much gets decided during the summer months. “My guess is that they would be beginning in earnest in September to look for a new archbishop,” he said. Hebda will celebrate his first Mass in the archdiocese Sunday at the St. Paul Cathedral, and indicated he’ll stick to a religious message. “There will be a homily, but it’s about the Gospel. It’s not a statement,” he said.
Posted by Mike at 9:28 PM