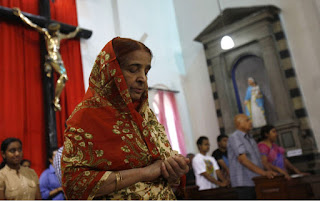 At the level of sweeping stereotypes, most Westerners tend to think of India and its dominant religion, Hinduism, as bastions of tolerance. Ever since the Beatles traveled to an ashram to study meditation, there’s been a chic about Indian spirituality as the ultimate in “all paths lead to the same place.” One might profitably ask Christians in today’s India, however, whether those stereotypes have anything to do with their reality. The answer you’re likely to get is, “Are you kidding?” In truth, India’s small Christian minority has felt under the gun for a long time, and they say things have become considerably worse since a political party called the BJP, backed by fundamentalist Hindu movements, swept to power in May 2014. (Calling the Christian presence “small,” by the way, is relative. Christians comprise around 2.5 percent of the national population, though some put it as high as 4 to 6 percent if house churches and independent movements are counted. India is so huge, however, that even the low-end estimate works out to almost 25 million people.) Recently an Indian website was created to collect reports of anti-Christian persecution, called Speak Out Against Hate, and it claims that so far in 2015 there’s an average of at least one violent episode every week. Here are some typical examples: On July 7, a band of Hindu radicals burst into the Jeevan Jyoti Convent School in Isagarh, Ashoknagar, hassling a Catholic nun and beating up a priest. A police report was filed, but so far no action has been taken. On June 28, in Adoni, Kurnool, the Christu Calvary Konda Church was attacked by radicals shouting Hindu nationalist slogans. The mob attempted to assault the pastor and his wife, who were forced to hide until police arrived. A week before, a Catholic shrine in Tangasseri, Kollam, was desecrated. The assailants left behind posters using derogatory language about Christian clergy, and also threatening to bomb a nearby shopping center affiliated with the local Catholic diocese. In response to such incidents, a cross-section of Christian leaders in January launched a new movement called the United Christian Forum for Human Rights. Lay activist John Dayal presented the initiative at a Delhi news conference. “2014 was a particularly traumatic year,” Dayal said. “It was conceived in sin, in a campaign based on hate.” Yet Dayal stressed that the problems facing Christians hardly began with the BJP’s resounding victory in last year’s national elections. “Since 1997, we have been recording between 150 and 350 cases of violence a year,” he said. “It doesn’t matter who runs the government … the non-state actors and the problems with the criminal justice system remain the same.” For many Christians in the country, a cataclysm that unfolded in the eastern Indian state of Orissa (Odisha) in August 2008 still colors the way they see their situation. Early that month, a revered Hindu spiritual leader named Swami Laxmanananda Saraswati was assassinated, most likely by Maoist guerillas. Radical Hindus, however, blamed his death on Christians and unleashed their rage on the local Christian population. In an orgy of violence that quickly spread to 600 villages, half of the 100,000 Christians in the area found themselves homeless, forced to seek refuge in a nearby forest. Some 120 Christians are believed to have been killed, some of them hacked to death by machete-wielding radicals. Three hundred churches were burned along with 6,000 private homes. During the rampage at least three women were gang-raped, including a Catholic nun. The tragedy was compounded during the exile in the forest, as more Christians died of either starvation or snakebite while waiting to go home. Dayal said Christians are still waiting for justice to be done for the victims of Orissa. “Out of 120 killed, there have been only two convictions,” he said. “One was a life sentence for murder, and one just seven years for abduction … as if nobody killed the rest of them.” While anti-Christian persecution is a global problem, the form it takes in India is especially noteworthy for three reasons. Religious prejudice is often bound up with ethnicity and poverty. India’s Christians are disproportionately drawn from the ranks of the Dalits, meaning the “untouchables” under the old caste system, and are therefore likely to be poor. By some estimates, 60 to 75 percent of the country’s Christians are Dalits, making them easy targets. Anti-Christian persecution isn’t all about Islam. The truth is that Muslim radicalism in places such as Iraq and Syria could disappear tomorrow, and that wouldn’t mean that Christians elsewhere are safe. It’s not just rogue states such as North Korea where Christians are at risk. India is a vibrant democracy and among the emerging superpowers of the early 21st century, with a constitution that guarantees religious freedom, though that’s hardly the reality on the ground. Dayal says that despite the threats, India’s Christians do not intend to passively accept their plight. “We claim our rights as children of God and as citizens of the state,” he said, “with the Bible in one hand and the constitution in the other.” For all kinds of reasons, including India’s capacity to use its growing power wisely, everyone – not just Christians – has a stake in hoping that Dayal and his fellow believers prevail in that effort.
Posted by Mike at 7:30 AM