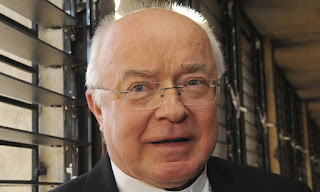 The former Vatican diplomat Józef Wesołowski has been taken to hospital with an “unexpected illness” on the opening day of his trial for alleged child sex abuse. The development, announced in a Vatican bulletin, has delayed the first trial inside the Holy See of a senior official on charges of paedophilia and possession of child pornography. The Vatican said the hearing at the state tribunal had started on Saturday morning when the promoter of justice announced that the former nuncio to the Dominican Republic had been admitted to intensive care at an unnamed public hospital with an “unexpected illness”. The trial was suspended and postponed until a later date, yet to be announced. No further details of Wesolowski’s medical condition were given. The fact that the 66-year-old Pole had been due to face justice inside the Vatican was seen as a major milestone in the city state’s history. Wesołowski is the first high-ranking official to be charged with paedophilia in a criminal court in the Holy See. The trial is seen as a test of Pope Francis’s commitment to tackling the church’s legacy of sexual violence against children. It is the first time the church has used the criminal justice system Francis put in place to handle cases of alleged clerical wrongdoing. Allegations that Wesołowski paid teenage boys for sexual acts while he was the Vatican’s top diplomat in the Dominican Republic rocked the Holy See when the story broke two years ago. Wearing a baseball cap low over his head, he allegedly trawled the promenade in Santo Domingo for victims among the shoeshine boys. The pope recalled Wesołowski to Rome in August 2013 after he was made aware of the claims. He has since been defrocked. The move was criticised in part because it was seen as an attempt to shield Wesołowski from prosecutors in the Dominican Republic. Last year, the Vatican stripped Wesołowski of his diplomatic immunity, and explicitly said the move could make him subject to judicial proceedings in other courts, though it has clearly sought to be the first jurisdiction to try him.
Posted by Mike at 3:36 PM