Divorce: Catholic church seems to have forgotten how to forgive - Cardinal 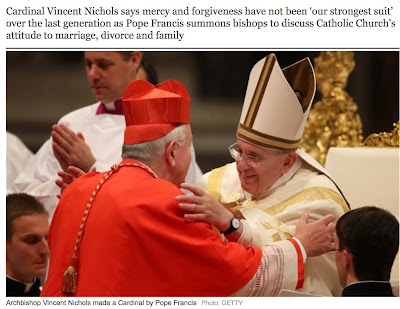 Britain’s most senior Roman Catholic cleric has warned that the Church has effectively forgotten how to forgive and must face up to the fact that people’s private lives do not always live up to an its “idealised vision” of family life. Cardinal Vincent Nichols said compassion for the difficulties people face in their personal lives had not been the Church’s “strongest suit” in recent years. He said it must create a “culture of mercy” as it approaches issues such as whether remarried divorcees should receive Holy Communion. The Cardinal’s comments came as he prepares to join bishops from around the world at a special gathering in Rome called by Pope Francis to discuss the Church’s stance on the family including controversial questions of marriage and divorce. Cardinal Nichols said the extraordinary synod on the family, which begins in just under a fortnight, could mark a major new direction for the 1.2 billion-strong Catholic Church. But he said that resolving issues such as admitting remarried divorcees to communion without abandoning the Church’s teaching that marriage is forever could require a “radical rethink” of some of its most central doctrines. The decision to call a special synod to discuss the family is seen as one of the most significant acts of Francis’s pontificate. Attention has focused on the issue of divorce following an address given by Cardinal Walter Kasper, a German theologian who has influenced Pope Francis, calling for divorcees to be treated with greater “mercy” by the Church. Pope Francis has also made mercy the main theme of many of his public messages. Earlier this month a powerful group of traditionalist Cardinals issued a public warning against any relaxation of key doctrines about marriage. But Cardinal Nichols said that the first thing he would have in mind as he set off for the synod was a recognition that “the gift of God’s mercy” had come to the fore, particularly since the election of Pope Francis. “I grew up very firmly in a church that understood itself as a church of sinners,” he said. “I don’t think it has been our strongest suit in the last 30 years. “And I think what Pope Francis is calling for is a return to that lived sense of the mercy and compassion of God who always accompanies us. “I think one of the challenges, one of the invitations that we face, is finding ways of creating a culture of mercy in the Church.” He insisted that the Church’s view that marriage is indissoluble would remain a “foundational rock” of its teaching but said it could not ignore the “frailty of the human reality”. Significantly, he said it must not only recognise the fact that marriages break down but also the “emergence and celebration of new relationships”. “The Pope over and over again says we start from the wrong place if we start from an idealised form or vision of marriage,” he said. “But we start from the reality of two people often who enter marriage with complex wounded histories who have all sorts of personal dimensions to their lives.” He went on: “In facing reality we also see and acknowledge that human relationship breaks down and so the two realities that are also there for us to hold in heart and in mind are the pain and distress of the breakdown of the marriage and the emergence and celebration of new relationships.” But he emphasised the difficulty the Church would face in trying to reconcile its teaching about marriage and the Eucharist as sacraments. “These two aspects of Catholic faith have deep roots and deep implications and I don’t see for myself where the area of manoeuvre opens up without quite a radical rethink on one or the other," he said. "And therefore I go to this synod really intent on listening to what people have to say.”
Posted by Mike at 12:39 PM