A Church with verve is at risk in Ukraine

John L. Allen, Jr. Crux September 13, 2014 No one should need persuading that what’s happening in Ukraine right now is alarming. A fragile cease-fire between Russian-backed separatists and Ukrainian forces could unravel at any moment, and even more lives may be at risk this winter as the country scrambles to make up for lost Russian gas. 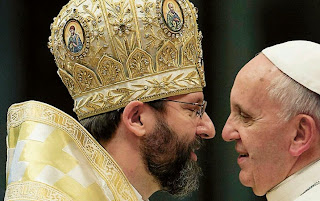 Pope Francis met Archbishop Sviatoslav Shevchuk of the Greek Catholic Church at the Vatican last year. (Photo/AP) Most basically, if one nation can slice off a piece of another with impunity, it’s hard to know what international law means. Yet if Catholics require an additional reason for concern, it’s this: What’s at stake in Ukraine isn’t just geopolitics or the military balance of power, but also one of the most remarkable Catholic communities anywhere in the world. The Greek Catholic Church in Ukraine is the largest of the 22 “Eastern churches” in the Catholic fold. Mostly located in Eastern Europe and the Middle East, these churches follow Eastern Orthodox rituals and spirituality, but acknowledge the pope as their leader. There are roughly 3 million Greek Catholics in Ukraine, around 7 percent of the population, and 6 to 10 million worldwide. Though little known in the West, the church’s recent history is the stuff of Hollywood drama. In the Soviet era, the Greek Catholic Church was the largest illegal religious body in the world, and suffered mightily for it. In percentage terms, no church produced more 20th century martyrs. Pope John Paul II beatified more than two dozen victims during a trip to the country in 2001, and most experts believe the total number of Greek Catholics who perished in that era of violent oppression is in the thousands. After Communism, the church experienced a rebirth that has flowered in some extraordinary creative energy. One example is the Ukrainian Catholic University in L’viv, founded in 1994. It’s the only Catholic university in the former Soviet sphere; as they like to say, it’s the only Catholic university “between Poland and Japan.” Its bold aim is nothing less than to rethink what a Christian university can be in the 21st century. During a reflection process in the early 1990s, planners identified two challenges: Building on the legacy of the martyrs. The idea, according to Bishop Borys Gudziak, the founding rector, is to pioneer “a new social, intellectual, and theological synthesis” of that experience – a theology of the catacombs. Repairing social trust. Gudziak said “the Ukrainian soul and psyche were profoundly damaged” by the Soviet period, because they were taught from early childhood “to think one thing, say another and do a third,” and to never fully trust anyone, even family and friends. To address that deficit, the university turned to the insights of Catholic luminaries Henri Nouwen and Jean Vanier, the founder of L’Arche, a movement that emphasizes building friendships with disabled persons. Gudziak’s idea was that because people with mental disabilities tend to trust others instinctively, having them around could produce an emotional leaven. The university invited them to join the community, not as charity cases but as “professors of human relations.” Residences include apartments for the disabled to live among the students, becoming part of the daily fabric of their lives. Greek Catholics have also become prominent players in national affairs. They were major proponents of Ukraine’s Orange Revolution in 2004/2005, and helped lead the Maidan protests earlier this year that swept pro-Moscow President Viktor Yanukovych from power. The Catholic cathedral of Kiev was converted into a makeshift field hospital during the uprising, which saw at least 100 people killed by security personnel. At times, emergency operations were performed on the church’s main altar. Archbishop Sviatoslav Shevchuk, the charismatic 44-year-old leader of the Greek Catholic church, emerged as a forceful advocate for the Maidan protestors, insisting they weren’t “nationalist extremists” but rather supporters of a “free, democratic, and European” Ukraine. At the moment, Shevchuk and other church officials are leading the charge against Russia’s intervention and calling on the international community to stiffen its resolve. Meeting this week in L’viv, the Greek Catholic bishops put out a statement titled “Ukraine is bleeding,” which included this warning about Russian aggression: “Whoever kills people in Ukraine will not hesitate to turn their weapons to attack any country in the world tomorrow.” Given that track record, it’s no surprise that whenever a pro-Moscow regime takes over, tightening the screws on Catholics tends to be high on the to-do list. Under Yanukovych, Gudziak got chilling visits from Ukrainian security agents. Rather than kowtowing, he published a memo outlining the campaign of harassment, which included tapping his phones. More recently a Greek Catholic priest was briefly kidnapped in eastern Ukraine, and most clergy and bishops have been driven from the region. The Russian Orthodox Church in Moscow has issued worrying statements blaming “uniates” and “schismatics” for fomenting the violence — both are pejorative terms for Greek Catholics. What all this means is that when Greek Catholics speak out, they know they may pay a price. In their statement on Wednesday, the bishops called for “coordinated efforts … to stop the bloodshed, to defend human dignity, and to restore life-giving peace,” warning that war isn’t just the fault of those waging it, but also those who could have stopped it but did nothing. Anyone with eyes can see how urgent the appeal is. Catholics inspired by the verve of this courageous Ukrainian flock, however, have a special motive for paying heed.
Posted by Mike at 2:10 PM