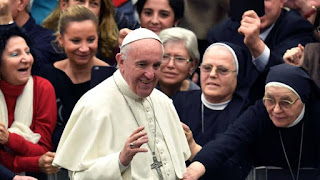 The Pope is facing an unprecedented smear campaign designed to undermine his three-year pontificate. It has been orchestrated by cardinals angry about his sympathy for homosexuals and divorcees. The campaign amounts to “a subterranean civil war” within the church, Marco Politi, an expert on the Holy See, said. He added that the smear campaign from within the Vatican included books, articles and letters contesting, in particular, the Pope’s teaching that divorced and remarried Catholics can “in certain cases” receive communion. Politi said that the criticisms of the Pope constituted an attack that was unprecedented in modern times. In an article published by Il Fatto Quotidiano newspaper to mark the Pope’s 80th birthday last Saturday, Politi said: “It’s a systematic campaign of delegitimisation, which questions the very authority of the pontiff and the rightness of his guidance.” A longstanding observer of Vatican affairs and author of the book Pope Francis among the Wolves, Politi said that the ideological battle resembled the one fought in the 1960s over the modernising reforms of the Second Vatican Council. While Vatican factions had long fought among themselves, they always accepted the role of the Pope as referee, he said. “It’s absolutely new that the attacks should be levelled at the Pope.” Last month four cardinals, including the conservative American Raymond Burke, wrote to the Pope asking him to clarify his guidance, which was published in a footnote to Amoris Laetitia (The Joy of Love), a teaching document issued last April. Some Catholics regard the apparent change in papal attitudes as overturning centuries of Christian moral teaching to fall into line with a secular world. Politi wrote that the four cardinals represented a significant portion of the clergy who were resolutely opposed to changes in the church’s teaching on divorce, homosexuality and the role of women in the church. Speaking yesterday, Politi compared the efforts to undermine the Pope’s authority to those of the Tea Party movement in the United States. “They kept trying to delegitimise Obama,” he said. “Of course they couldn’t topple him, but they did succeed in influencing the succession. A similar process is at work here and the aim is to prevent the election of another reformer.” The Pope’s opponents see themselves as victims of persecution. Journalists from the conservative Catholic website lifesitenews.com said that they encountered an unprecedented climate of paranoia when they visited senior Vatican officials last month. “Many were afraid of being removed from their positions or of encountering severe public or private reprimands and personal accusations from those around the Pope or even from Francis himself,” the website wrote last week. “They are also anxious about the great damage being done to the Church and being helpless to stop it.” Robert Mickens, editor of La Croix International and an experienced Vatican watcher, said the Pope’s critics were well organised but did not represent a significant Catholic constituency: “People in the pews are delighted with what the Pope is doing. His approval ratings are about 85 per cent.” The conservatives would not be able to derail the Pope’s modernising reforms, he predicted. “People in parishes are not concerned about the church being too merciful.”
Posted by Mike at 8:26 PM