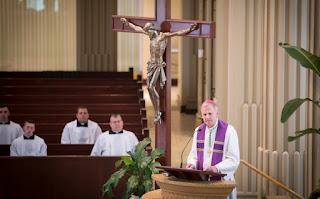 Betrayal, regret, healing and forgiveness were key words at a special Service of Lament on Sunday at Kansas City’s Cathedral of the Immaculate Conception for victims and survivors of sexual abuse within the church. Bishop James V. Johnston Jr. went straight to the point in his homily before a full congregation that included most if not all priests from the nearly 100 parishes in the Roman Catholic Diocese of Kansas City-St. Joseph. “I am here to confess, apologize and repent for the sins of those who held a sacred trust in the church and who betrayed that trust,” Johnston declared, saying he was speaking “for the priests and bishops and anyone in the service of the church whose actions or inactions harmed the lives of children entrusted to their care.” This diocese, like many others, has been rocked by accounts of sexual abuse of children. It has settled multimillion-dollar legal cases involving scores of victims and their families. Former Bishop Robert Finn was charged with a criminal offense for failing to report suspected child sexual abuse. He lost his bishopric. Johnston said that since he was installed as bishop in November, he has heard firsthand stories from victims and survivors, many of whom attended Sunday’s service. At many times the service was emotional, with congregants dabbing away tears. The bishop also announced some steps that are being taken in conjunction with the church’s Office of Child and Youth Protection. ▪ The diocese will declare an annual day of prayer for the protection of children, beginning April 26, 2017. ▪ It will establish a multidiscipline team to review diocesan policies and implement improvements. ▪ It will also develop a training program to better help victims and survivors tell their stories. “I am committed to finding the best ways to support healing throughout the diocese,” Johnston said. The congregation knelt as a litany was read of actual statements from victims and survivors. “The pain was so intense I did not want to live,” said one victim’s statement. “When I came to you, vulnerable and abused, you turned me away,” said another. “When I was brave enough to tell you the truth, you chose to side with my abuser,” said yet another. The litany also included responses from the church. “You should have been able to trust us,” said one. “You were just a child. It was not your fault,” said another. A majority of the congregation accepted an invitation to write a petition, prayer or statement of pain or hope on a slip of paper and bring it to a large glass bowl. When the bowl was full, Johnston added his own paper and blessed them all. They will be sealed away in a wooden box. New petitions and prayers may be added if more victims and survivors come forward. Johnston said the 2 p.m. Service of Lament caused him to be more nervous than when he was installed as bishop. He said he was deeply grateful that so many attended. “I offer you my deep sorrow and profound regret for what Catholic people have endured,” Johnston said. “I ask forgiveness.” The bishop said no one can be healed without coming to the point of forgiveness. He repeated it for emphasis. “I ask for your forgiveness, not so much for my benefit, but for yours,” he said, adding that forgiving does not mean forgetting. “We won’t forget. We can’t forget. We will never forget.”
Posted by Mike at 6:34 AM