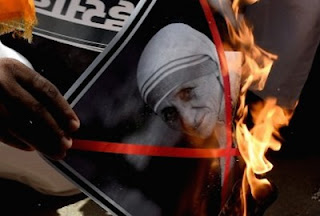 A church official in India has demanded action against a parliamentarian who accused Mother Teresa of using her social work as a cover for proselytism. "These kind of statements only show the mentality of one person. I would request the Indian government take action against him and prove its sincerity towards minorities," Bishop Theodore Mascarenhas of Ranchi, secretary-general of the Catholic Bishops' Conference of India, told ucanews.com. He was reacting to a statement by parliamentarian Yogi Adityanath, a member of the ruling Bharatiya Janata Party (BJP), that Mother Teresa was part of a conspiracy to "Christianize India." "Mother Teresa was part of a conspiracy for the Christianization of India. Christianization has led to separatist movement in parts of northeast India, including states of Arunachal Pradesh, Tripura, Meghalaya and Nagaland," Adityanath said while speaking at a religious program in northern Indian Uttar Pradesh state on June 18. Fellow BJP parliamentarian Subramanian Swamy supported Adityanath by saying such views were not "isolated." This is not the first time that Mother Teresa has been accused of converting Hindus to Christianity. In 2015, Mohan Bhagwat, the chief of the Hindu fundamentalist socio-religious group Rashtriya Swayamsevak Sangh (national volunteer corps), said Mother Teresa aimed to convert people to Christianity thorough her work. This is an umbrella group for Hindu hardliners and the political wing of the Bharatiya Janata Party that now rules the federal government and many Indian states. Bishop Mascarenhas said he wants the government to take action on "out of place and immature comments" that are meant to spread hatred. "We are happy that the vast majority of the Indian population does not think like this man. Rather than making such comments, it would be good if this person went and saw what Mother Teresa has done and what her sisters are now doing in India and across the world," he said. "These comments are only made to discourage those serving the poor. If the intention is to serve the poor then it does not matter who is doing it," he said. Blessed Mother Teresa founded the Missionaries of Charity in 1950. She was awarded the Nobel Peace Prize in 1971 for her work with the poor in Calcutta, now named Kolkata, and will be canonized a saint by Pope Francis in September.
Posted by Mike at 8:49 PM